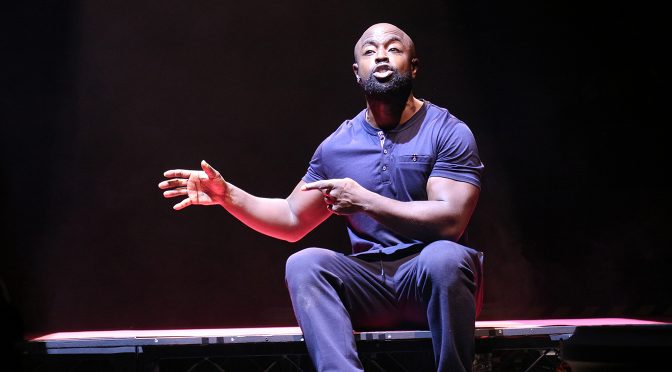 While its back catalogue of broadcasts from NTLive was a blessing during lockdown, being back on the South Bank for a show in real life is the real deal. For those lucky enough to have caught the brief window of performances, before a second closure, this new play by Clint Dyer and Roy Williams was a very special occasion.

An introduction from creative director Rufus Norris, justifiably proud of his theatre getting back into action, added to the atmosphere. The caution shown around protecting customers is clear: there are allocated tables before being taken to seats and – beware – last orders for pre-show drinks is in the afternoon.

What of the play selected to welcome theatre devotees back? As well as the important subject matter of racism, Death of England: Delroy is topical. After seeing shows years old, it’s good to be reminded of how quickly theatre can respond to current concerns.

A sort of sequel to their show last year, Dyer and Williams develop a character mentioned in their previous monologue, Death of England. Recounting a “very bad day” Delroy has had – quite randomly – this likeable character runs into trouble with the police. Serious consequences include estranging him from partner and new-born child.

The show provides a starring role for Michael Balogun who is superb. It’s amazing to learn he was drafted into the project last minute. A rapid-fire delivery shows remarkable confidence with the script. And his level of energy over 90 minutes is astounding.

Welcome as the show is, it would be wrong to say it’s perfect. The Olivier is an unforgiving space at the best of times and the Covid-reduced seating feels particularly detrimental. All the more credit to Balogun for creating an atmosphere that ranges from convivial to confrontational.

The unusual conditions can’t be avoided. But Dyer’s direction creates problems too. It’s understandable that all aspects of design (the set by Ultz, lighting by Jackie Shemesh and sound by Pete Malkin) want to show off what the National is capable off. Like us, the team is thrilled to be back in the theatre. But does this show need any extras? Loud, dazzling, effects and some pretty naff props (including an explosion of confetti) are not needed with such a strong script.

Because the text itself really is excellent. The bravura language, which Delroy aptly describes as a “riot in my mouth” is provocative and funny. The ease with which ideas are raised is impressive, including arguments both enlightening and far-fetched (a motivation for voting to leave Europe is worth a raised eyebrow). There’s anger alongside a cool recognition of “colour class bullshit” that pervades all aspects of Delroy’s life. Putting the spotlight on privilege couldn’t be more timely; Dyer and Williams are experts at it. 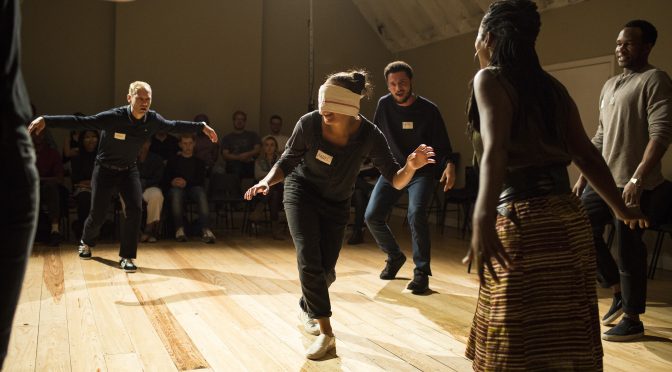 The upstairs auditorium at Sloane Square has been stripped back (I didn’t even know the space had windows) by designer Ultz, for Nathaniel Martello-White’s new play. The gathering of an extended family to discuss their painful past is part community meeting part trial, with memories explored and dissected.
Their shared secret is a painful one – the childhood abuse of Angel, who has convened this conference. The play is full of discomforting observations on race and aspiration, offering insight into the impact of abuse on a whole family. Traces of neglect that go back a generation, and anger and confusion carried forward, are painfully rendered and cumulatively overpowering.
Credit to director Richard Twyman, aided by a superb cast, for marshalling a show that, even at 90 minutes long, feels mammoth. Seated in a circle for a lot of the play, we can look anywhere at any time for a committed performance. Franc Ashman, Lorna Brown, Kirsty Bushell and Indra Ové are equally praiseworthy as the four sisters but, if there is a lead credit, Adelle Leonce as Angel fully deserves it. The men in the cast are strong too, with James Hillier grabbing attention as Angel’s stepfather.
With a touch too much backstory for some characters and at least one superfluous subplot, the play’s construction feels overworked. But its formal qualities are adventurous and memorable. Scenes are not presented chronologically. Action and dialogue overlap. Who is remembering what is seldom pinned down. As if all that weren’t demanding enough, there’s some odd language, including clunky flights of fancy, with group discussions interspersed with internal dialogues, one-to-one fights and characters moving back in time to younger stages of life.  Various cast members also adopt the role of the grandmother (confusing if you didn’t sneak a peek at the programme before hand).
I was reminded of a video installation, which is one of the character’s jobs, such as Ragnar Kjartansson’s multi-screen show at the Barbican: the audience decides which character to follow. Or a party game played in the piece, where characters making animal noises have to ‘zone in’ on their designated partner. There’s a fine line between all this being engaging and being just a turn off. At times, Torn appears simply obtuse. It’s the author’s prerogative to decide how much aid he gives an audience. I confess I could have done with a little more help here.
Until 15 October 2016
www.royalcourttheatre.com
Photo by Helen Maybanks 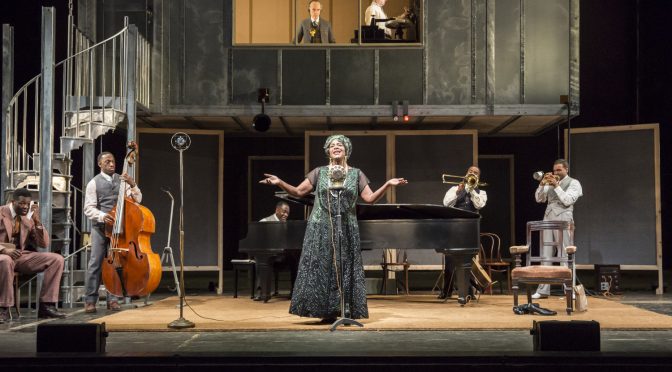 Part of August Wilson’s decathlon of plays about race relations in America, this 1982 work is set in a 1920s Chicago recording studio. While the titular diva, known as the mother of the blues, fights with her manager and producer over adapting her signature song into a modern jazz style, her backing band’s members reveal personal and political tensions of their own.
It could be heavy stuff. Yet, by setting up plenty of laughs and endearing characters, Wilson’s play is hugely entertaining. Most impressively, by showing how racism infuses – indeed poisons – lives, the politics here are as emotive as they are educational. The segregated society the play is based in takes some getting your head around – the gap between races so fundamental – but showing how the players take it for granted has a humbling effect. 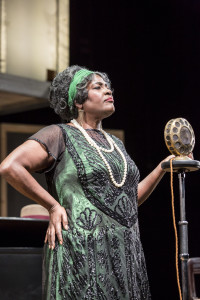 If the play has a failing, it’s that you can’t – and don’t – get enough of Ma Rainey. A flaw compounded by the fact that the excellent Sharon D Clarke takes the role. Written relatively thinly, the motivation behind her often-amusing artistic temperament is portrayed confidently and certainly makes you think. But with a voice this strong, it seems downright foolish not to get more music out of Clarke.
Impeccably directed by Dominic Cooke, Ultz’s design creates a sound booth aloft and a basement room that the band rehearses in. The feeling is sparse, almost wasteful given the size of the Lyttleton stage, but the claustrophobia is fitting enough. In a narrow space a quartet of excellent performers carefully reveal frequently harrowing stories from the boys in the band.


Giles Terera and Clint Dyer make a great double act as long-standing friends who play together. O-T Fagbenle has the star part as Levee, a talented, troubled and ambitious youngster, who embodies the power of new music – jazz. A tough call, we have to take Levee seriously while laughing at him quite a bit and Fagbenle manages this balance well, skillfully revealing the character’s tragic background. Lucian Msamati’s philosophising Toledo wants to open the eyes of his illiterate colleagues. Exquisitely delivering the most didactic of lines, he deserves our applause – our affection for him paying off with the play’s startling, tragic, conclusion. The impact and legacy of racism is clear here, making the play still frighteningly apposite.
Until 18 May 2016
www.nationaltheatre.org.uk
Photos by Johan Persson 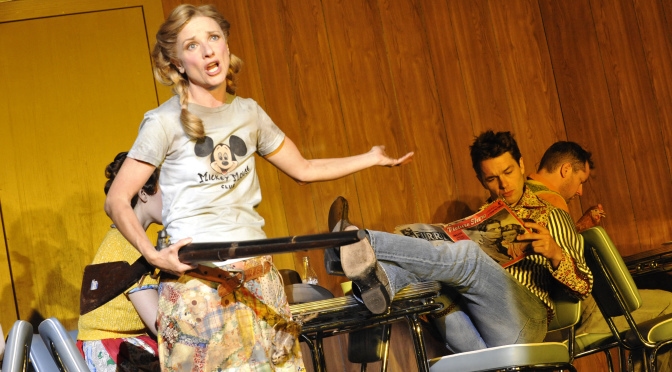