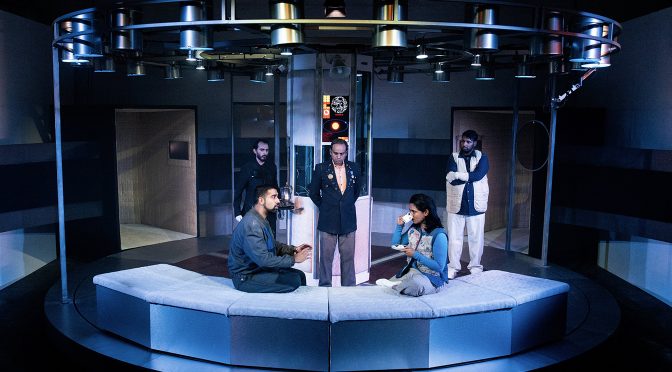 Chekhov in space turns out to be a great idea. Vinay Patel’s inspired version of the Russian classic has theatre’s most famous trees on a spaceship that is searching out a new home for humanity. The mission is led by successive generations of clones, who have plenty of time to philosophise while those below deck do the work. With a new take on an aristocracy (whose members are actually inbred) and plenty of speculation on the human condition, Patel’s adaptation is stellar.

It makes sense that the astronauts are either wildly busy keeping the ageing ship going or have plenty of time to lounge around displaying a mix of ennui and desperation you can recognise as Russian. But Patel’s version stands happily on its own – you don’t have to know the source material. True, some dialogue is clunky (maybe it seems strangely dated)? But the characters are dealing with the weight of the past, even if the action is set in the future. The mission started centuries ago and how much old aims and rituals should shape lives becomes a burning question.

The performances are overall good – but not all are great. While Patel handles the classic plus another genre on top, juggling both proves too much for some actors, who seem stuck in a more traditional version of the play. There’s some waving of hands (ironically, explicitly warned against in the script) and stagey yawning (you know the type). And some delivery emphasises rather than accommodates long-winded speeches. It should be stressed that possibly the hardest role, a reimagining of the play’s manservant, isn’t part of these reservations. Despite being literally robotic, Hari Mackinnon’s Feroze is full of life.

Thankfully, a central trio of relationships – between the Captain, one of her daughters and an aspiring engineer – is strong, with excellent performances from Anjali Jay, Tripti Tripuraneni and Maanuv Thiara, respectively. Jay’s matronly role is aided by a focus on the fate of her son that leads to emotional moments. Her character aims to be “warm but at a remove”. That she does not quite manage this gives Jay a great deal to work with.

The production glides over some of the odder moments of Chekhov – the characters’ strange emotional intelligence and obsessions – which Patel, wisely, doesn’t linger on. All that misery and unrequited love can prove tiring if the pace isn’t strict, and director James Macdonald handles this perfectly. There’s also an atmosphere of menace that is particularly impressive.

Final praise goes to the convincing design. Even a decrepit spaceship on a budget isn’t easy, but Rosie Elnile makes shabby touches work for her. And her design suits the space perfectly. The use of a revolve and windows in the ship are simple, subtle and effective. Which really sums up the whole production. Behind the headline of a radical new version, the show works in a clear and concise manner.