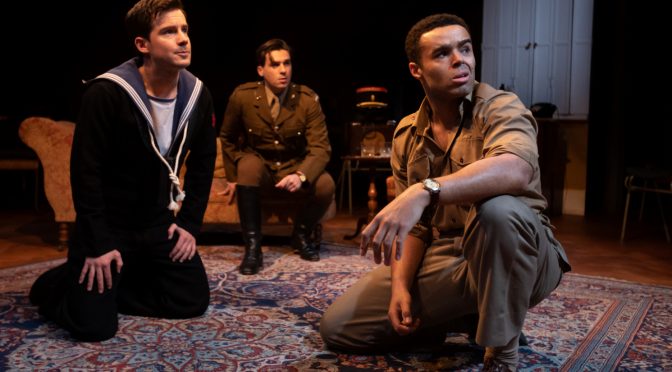 Guy Slater’s new play makes for an informative history lesson about Myanmar. The country is in the news and the theatre is dedicating the run to Wa Lone and Kyaw Soe Oo, currently imprisoned in Yangon. But this piece struggles to make a drama out of the past or to make current events seem urgent. Fighting to introduce the personal into the political, Eastern Star ends up being a dull play about an important subject.

This is the true story of BBC journalist Christopher Gunness and his source during the protests of 1988, a man whose code name gives the play its title. The men are reunited after 25 years, and it seems we are supposed to be shocked that they have led different lives. In order to fill us in on events, in scene after scene, characters display disbelief that living under military rule or going to prison for 16 years is not… nice.

The experienced cast does well enough to convey the heavy issues, despite the clumsy script (I’ve no doubt a couple of press night stumbles will be ironed out quickly). But Michael Lumsden, who plays the now lauded former reporter, has to portray a character who becomes tiring. The possibility that he inadvertently revealed Eastern Star’s identity to the authorities is drawn out with prolonged hand-wringing in a failed attempt to create tension. David Yip takes the title role, aka U Nay Min, and does well to convey the trauma and anger of his character – that of the “silent architect” of popular protest now written out of history.

What the people of Myanmar know about their history could be explored more. Slater provides the device, a niece who now hears her uncle’s story, capably performed by Julie Cheung-Inhin. But we need more of her to stop the role becoming patronising: we only get generic comments about a younger generation. The play suffers from repetition and it is only Slater’s firm direction, notably more proficient that his text, that gives any pace.

It’s not that Eastern Star doesn’t provide food for thought. But the conservative structure and dialogue are tiresome. Lumsden has to deal with a lot of journalese, there seems little difference between his everyday speech and flashbacks of his reporting. It’s clear we’re in trouble from the start when he returns to Myanmar to settle “unfinished business”, surely a phrase better suited to a Hollywood movie. Like many of the clichéd efforts to inject excitement, Slater doesn’t just fail, he frustrates his play’s worthy aims.