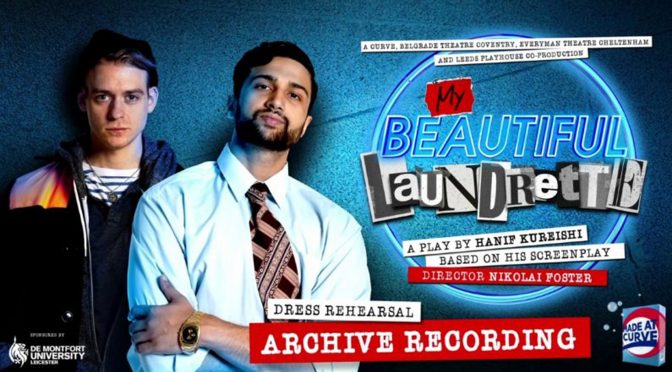 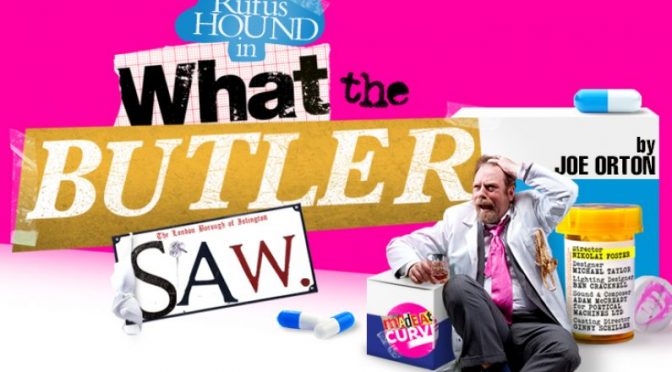 While trapped in our homes due to the Covid-19 lockdown, the generosity of theatres all over the country means that we can enjoy shows from venues we might not normally visit. This production of Joe Orton’s classic 1967 madhouse comedy, from the Curve Theatre Leicester, is one of many examples of plays from places I’m afraid I’ve never been to.

A word of warning: the recording is very much for archival purposes, as the camera is static and at the back of the auditorium. It’s a long way from the broadcasts put on for cinemas by NTLive. The sound quality is poor. But, to be positive, it’s closer to your average trip to the theatre – there’s even coughing and chatting from the crowd that you can pretend to shush if you like!

What the Butler Saw is a great play. Orton’s mix of crude farce, Wildean epigrams and just a touch of horror is extraordinary – clever as well as funny. Director Nikolai Foster gives the show the speed it needs, as outrageous characters all descend into a “democratic lunacy”, while a talented cast delivers the often complex dialogue assuredly.

Rufus Hound and Catherine Russell both give star turns as the unhappily married Dr and Mrs Prentice, who run a madhouse and should qualify as inmates. Hound starts off nicely reserved, although not missing any chance to be saucy, and escalates the action marvellously. Russell ensures her character matches her husband for malice and has a great icy edge. Dakota Blue Richards and Jack Holden acquit themselves well as a prim secretary and a blackmailing hotel bellboy who cross-dress and change identities to great effect. Stealing the show is Jasper Britton as the visiting government inspector, Dr Rance. Britton delivers Orton’s convoluted nonsense superbly, with terrific ravings and delightfully delivered crazy theories. He is, of course, the maddest of a mad bunch.

Best of all, Orton’s play still shocks. The question of how our squeamishness might have changed since it was first written is raised: Dr Prentice as predator is surely more uncomfortable, likewise the jokes about sexual assault and rape. But Orton’s queasy incest theme and satirical highlighting of all kinds of hypocrisy haven’t faded in their power at all. The “pointless and disgusting” subject matter and increasing improbabilities, handled with Orton’s fantastic energy, pose a challenge as well as plenty of laughs.

Available for the duration of the lockdown 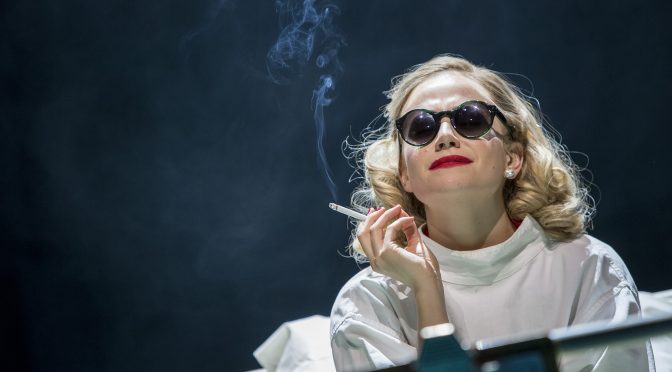 Richard Greenberg’s adaptation of Truman Capote’s novella wins admiration for resolutely not replicating the famous film onstage. Going back to the original source, there’s a determination to show the dark side of heroine Holly Golightly’s desperate life: prostitution, abuse and depression, described as the “mean reds”. It’s a disorientating experience for an audience if expectations are based on the production poster. Not necessarily a bad thing.
Sitting near me, a fan of singer Pixie Lott, who takes top billing in a font size bigger than the title, seemed puzzled. It can’t have been the thin story, which director Nikolai Foster propels nicely. Maybe it’s the small amount of singing (although what there is impresses). Lott gives a credible performance, tethered by studiously avoiding any trace of the movie’s iconic star, Audrey Hepburn. Here, Holly is blonde, defiant and downright sexy – it really is “Golightly gone” – a total transformation. A fine idea, but consequently we have to wait until two emotional scenes near the end to really glimpse Lott’s considerable acting potential.


It’s clear to Lott, although it may be another surprise to some, that Holly isn’t the focus here. It’s Capote’s alter ego, a nameless writer, we are forced to focus on. Played by an exceptionally hard working Matt Barber, who injects a good deal of dynamism, fiercely holding the show together, it all comes down to how interesting you find this one writer’s struggle for success and journey of sexual discovery.
Capote, of course, found himself fascinating. If you don’t share his opinion, despite Foster’s efforts, the story is inconsequential. The show comes close to feeling like breakfast, lunch and dinner at Tiffany’s when just a cup of coffee would have sufficed. And there’s a cat – an astonishingly well-trained one you can follow on Twitter (@TiffanysBobCat). While everyone here is far too good to be upstaged by his feline talents, I’d rather follow him than the author any day.
Greenberg’s work is exemplary in creating the feel of a short story on stage – which is interesting – so the crux is how much Capote you can cope with? The case against? Holly isn’t quite the invention she’s cracked up to be, while secondary characters are weak, with the ensemble reduced to dodgy divertissements (rollerskates? No thank you). If you like your humour waspish with a big dose of self-indulgence, this fine production serves the author better than he deserves.
www.breakfastattiffanys.co.uk
Until 17 September 2016
Photos by Sean Ebsworth Barnes 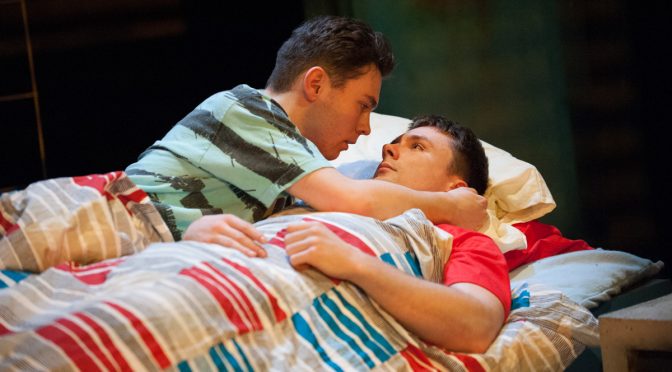 Jonathan Harvey’s iconic gay coming-of-age story, Beautiful Thing, celebrates its 20th anniversary with a new production at the Arts Theatre in Covent Garden. Despite some nostalgic nods, the play is as fresh as ever: a skilfully written comedy drama with fantastic roles and an admirably un-patronising focus on working-class life. Beautiful Thing touches on universal themes with a winning bravery.
The huge success of the play, and the subsequent 1996 film, create a special atmosphere with seemingly every audience member knowing every line. The jokes – of which there are plenty – are anticipated gleefully and the roars of laughter almost interrupt the action. Director Nikolai Foster gives the crowd what they want and his staging is a respectful affair. But it’s impressive to note his firm hand, with moments of quiet imposed as the relationship between the two young boys, Ste and Jamie, neighbours on a council estate in Thamesmead, blossoms into romance.


The superb Suranne Jones as Jamie’s mother shows the piece is as much about parental relationships as anything else. Playing the hard-nosed Sandra with skill, duelling with her neighbour Leah and dealing with her lover Tony (Zaraah Abrahams and Oliver Farnworth – both in fine form), Jones gives a tremendous emotional edge to the role. Through strong performances from Jake Davies and Danny-Boy Hatchard, Jamie and Ste’s shared fears about emotions and the future are presented as those of boys rather than men – an important point central to the play. Harvey’s writing and the skill of the young actors enhance the empathy and humour and ensure sure the play lives up to its title.
Until 25 May 2013
Photos by Mike Lidbetter
Written 18 April 2013 for The London Magazine