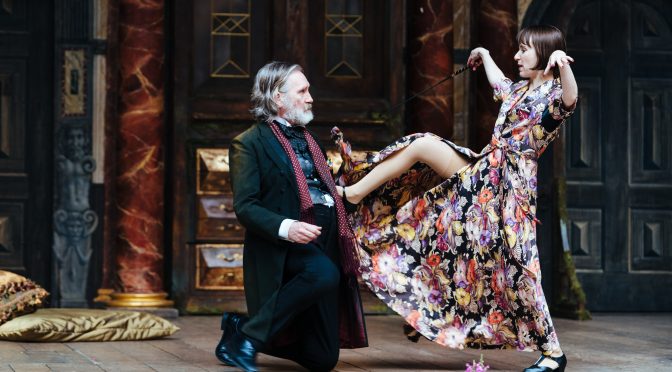 Shakespeare’s comedy, containing all manner of trials for married life, could well be the perfect fit for the South Bank venue that bears his name. In Elle While’s production, the often broad humour enjoyed in productions at The Globe is in full force. The show is as smutty as it is witty, all out to include the crowd, and a great deal of fun.

The setting for Sir John Falstaff’s efforts to become a gigolo – and the plots to stop him – is updated to the 1930s. The decade provides some lovely costumes from designer Charlie Cridlan while Frank Moon’s music adds a great deal of energy. But the production is very much for today, with an eye on the #metoo movement the men here are pretty awful. I’ll not argue with the observation but there’s a danger, as men try to tyrannize wives and daughters, that the comedy will turn sour; it’s While’s achievement that the play still manages to be funny.

With the husbands, who aren’t really going to be cuckolded, Forbes Masson has a nice line in apoplectic rage while Jude Owusu does well with his character’s jealousy. The men who surround their houses, a trio of suitors and a Welsh parson, are also easy to laugh at (with Richard Katz’s ‘Allo ‘Allo accent making him stand out). Meanwhile, Falstaff becomes a real villain. The interpretation is fair enough when you consider his plans. Pearce Quigley’s performance is undoubtedly a success: his deadpan delivery gets a lot of laughs and his plentiful adlibs, while getting most of their charge from seeming irreverent, are good. Just one question, against all the odds, don’t we want Falstaff to have some charm?

There’s no doubting Quigley’s success with physical comedy – he can really hold a stage. Indeed a big key to the success of the show lies with its continual movement, most obviously with Sasha Milavic Davies’ choreography and a lovely little recap scene that is mimed. But a combination of manic dashes and confident surveying of the stage are carefully balanced throughout. The Merry Wives of Windsor isn’t a true farce, the pace is different and While understands that. You can see the combination in Falstaff’s final humiliation, when the cast mask themselves for a fairy masque, (which will look quite lovely when the weather improves) – here’s a scene marked by a wonderful sense of rhythm.

The real triumph of the production comes with the women in the play which it brings to the fore and makes the real stars. Sarah Finigan and Bryony Hannah take the leads as the eponymous wives and give delightful performances. They’re joined by a feisty Anne, the wonderful Boadicea Ricketts, who excels at carrying the show’s story of young love. And the play’s democratic bent adds further joy with its working class figures. There’s Mistress Quickly, of course, but a clever recasting of the local landlord as a hostess makes both Anita Reynolds and Anne Odeke major roles that add heart to the show. Revelling in its female characters, While delivers not just merry wives, but merry women all around, and a happy audience as well.