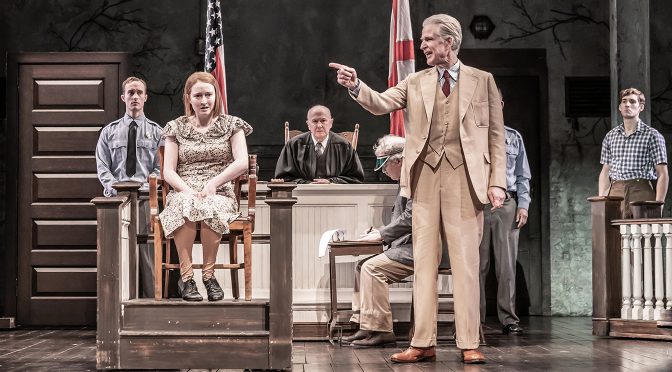 It’s easy to understand why this new play from Aaron Sorkin, based on Harper Lee’s seminal novel, is a hit. A hard-hitting courtroom drama about racism in the American south, it’s a serious play that is important but also approachable. There is a lot of traumatic content that’s difficult to watch and hear, but somehow the overall message is hopeful. In director Bartlett Sher’s production, we are all on side and all outraged.

The star role of Atticus Finch is currently played by Matthew Modine. As the lawyer who defends African American Tom Robinson, who is accused of rape, it’s a tough role. Finch is so obviously heroic, his optimism so central to the play’s theme, that he might be unbelievable. But Modine makes an admirable Atticus – the character’s eccentricities humanise him. The pressure he’s put under by his small community is balanced by those who support him.

Importantly, Modine doesn’t steal the show. For a play about race, a lot rests on two African American characters. It’s a struggle (the source material shows its age), but Sorkin’s writing develops the roles and Sher ensures they are given space and time in the show. Jude Owusu gives a fantastic performance as Robinson, bringing out every moment of the character’s autonomy. And Cecilia Noble’s Calpurnia brings touches of humour and cynicism that save the tricky role of the family maid.

As for the villains – yes, they are awful, and the play doesn’t hold back. When highlighting the problems faced by Mayella, who accuses Robinson of rape, Atticus becomes ruthless, telling us we can feel pity for the abused girl after the trial. There’s a further excellent performance here from Rebecca Hayes as Mayella. The young girl’s desperate existence is balanced with the racism she spouts. The scene of her parroting her father’s demented reasoning is distressing and powerful.

Most of us know that justice (and common sense) do not prevail in To Kill a Mockingbird. But, despite the book being known to most of the audience, there is still a sense of suspense. Immersion into the – thankfully distant – world of the 1930s is achieved through Sorkin’s clever emphasis on young narrators so that we can share their sense of confusion and incredulity. Taking the roles of tomboyish Scout, her brother Jem and their friend Dill, Anna Munden, Sam Mitchell and Ellis Howard end up leading the show.

The trio of friends report on what went on during the trial and subsequent dramatic events. They inject a surprising amount of humour as well as excitement as their childish antics endear. The play becomes a coming-of-age story that combines the wonder of youth with the disappointments that surround growing up. Mitchell, in particular, gets to shine in an admirable study of a father and son relationship. The excitement of “stunning, magnificent and rare” holiday adventures combines with fear and frustration, which makes the kids’ description of their summer appropriate to the show itself.