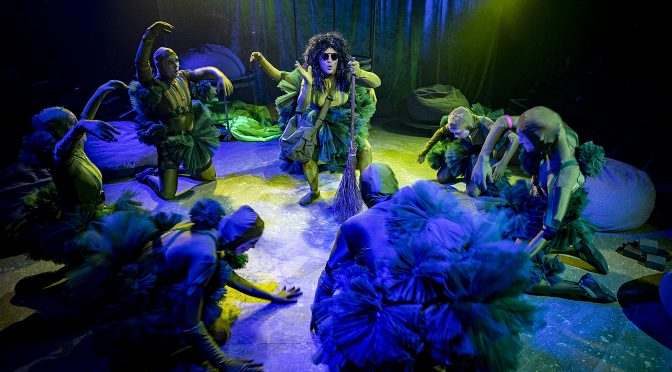 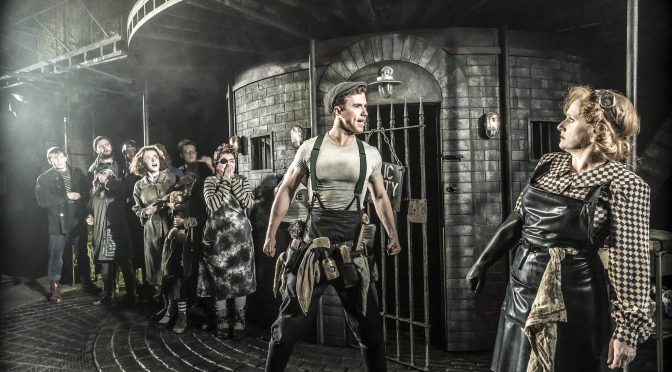 Finally receiving its London premiere 13 years after it was such a success on Broadway, Urinetown The Musical opened this week at the St. James Theatre. The dystopian satire, by Mark Hollmann and Greg Kotis, earned a host of awards in the States. Although it struck me as strangely dated, a standing ovation at the performance I attended makes it clear that there’s an audience desperate to go.

The unprepossessing premise is that an ecological disaster has resulted in a world where people pay to pee. There’s surprisingly little toilet humour actually. Instead it’s a satire on politics and the musical form itself. I say it’s old fashioned since the mischief and the tastelessness now seem predictable, but the second act provides some memorable musical numbers and it’s always nice to see a musical trying a little bit of politics.

There’s certainly nothing wrong with the production – indeed it makes the show worth spending your pennies to see. Jamie Lloyd’s direction is deft and dark, Soutra Gilmour’s design crying out for a West End transfer and the performances from a top rate cast are strong.

Jonathan Slinger is a revelation as the narrator and police officer Lockstock, ably abetted by Adam Pearce as officer Barrell. Police and politicians are merely the henchmen of business baddy Cladwell, performed archly by Simon Paisley Day, who is ultimately willing to sacrifice his daughter Hope, played by Rosanna Hyland. Hyland is joined by Richard Fleeshman, whose character Bobby Strong leads a Les Mis-style rebellion (wearing a pre-shrunk T-shirt despite the water shortage), both young leads look the part and sound great. Stealing the show, though, is the excellent Jenna Russell, who gives such a spirited performance as Mrs Pennywise she stops you thinking she’s wasted in the role.

As the characters’ names will have indicated, and direct addresses to the audience make clear, Urinetown is all very knowing. The conventions of musicals are prodded mercilessly, and this joke, though performed well, tires. Maybe the final irony is that the show shoots itself in the foot – if it doesn’t take the genre seriously then why should we? It’s clever, but not that funny and sacrifices serious points. After all, it’s difficult to say that much with your tongue in your cheek all the time.

Written 13 March 2014 for The London Magazine