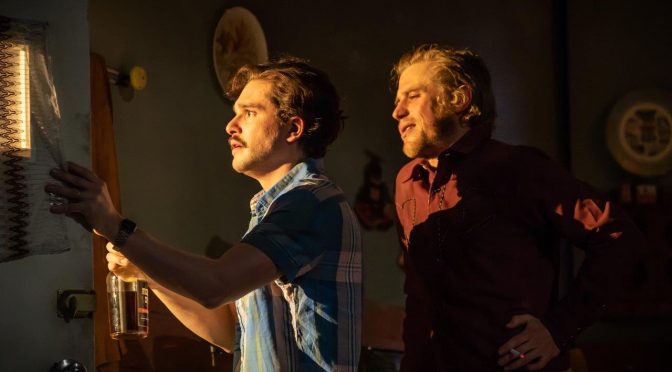 Dunster and his cast, who play two bickering brothers, have a keen appreciation of Shepard’s humour. Even as their antics flip from the sinister to the increasingly desperate, elements of the absurd are emphasised. While the siblings’ estrangement has a longer history than Harington or Flynn manage to suggest and the tension throughout could be sharper (Flynn is never quite as physically threatening as the text suggests), these are detailed studies and the performances are worth the price of admission. Harington is unrecognisable as the geeky Austin, a semi-successful screen writer. His rivalry with Lee, who Flynn makes a charismatic rogue, is subtly played. As the movie Austin thought he had lined up is canned, in preference to a feeble pitch that part-time crook Lee thought up and promoted through a combination of gambling and “beginner’s luck”, the professional setback leads to a breakdown that Harington makes very convincing.

Austin’s occupation – and, through it, Shepard’s exploration of writing – proves tiresome. The illusions crafted in movies (not films, please note) are all a part of exploring that old American Dream. Admittedly Shepard does this in credible detail. The sense of time and place is wonderful – credit to Jon Bausor’s set and costume design here, too – but this is a small spin on an old topic. And credit, also, to raising the problems associated with masculinity at a time before the word toxic was attached to any discussion of men. Sadly, accurate as it may be, True West is ultimately heavy handed despite the efforts of a talented director and his leading men.