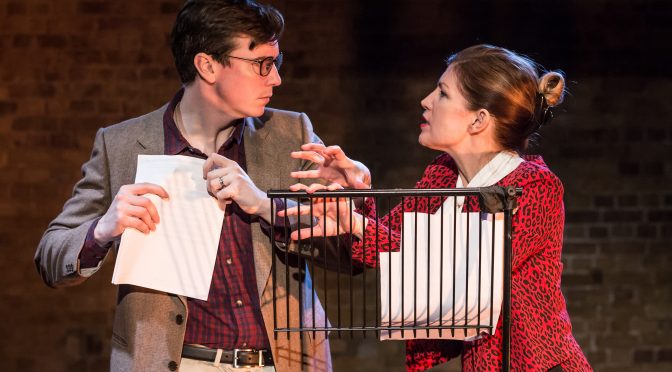 Laudably, award-winning director Phil Willmott likes his classics to have modern-day relevance. The title of Ibsen’s 1882 play, which pitches the individual against the masses, is to be adopted for a season of shows that runs through the first quarter of this year. The idea is exciting – look out for Can-Can! next month and a production of Othello after that – but unfortunately An Enemy of the People itself is not a propitious start.

This adaptation, from none other than Arthur Miller, has Ibsen’s Doctor Stockmann in America and pitted against his community when he discovers that a plan for its economic regeneration, based on a spa, is doomed by environmental pollution. The fit with the original sounds snug but proves uncomfortable. The time and place end up as a kind of allegorical wilderness. The emblematic roles for small businesses (Ibsen’s bourgeoisie) are confusing, and representation of the press also fails. Despite a nice depiction from Jed Shardlow as a mendacious editor, this fourth estate needs updating.

Willmott’s direction is impeccable and, when pressure grows on Stockmann to deny scientific facts, he manages to inject tension. The cast is generally strong, although some accents could be tighter. David Mildon takes the lead role, which, despite being written as ridiculously naïve, he grows into the nicely. And there is admirable support from Emily Byrt as his wife – it’s good to see her doubt and anger at spousal inflexibility. Mary Stewart also does a stand-out job as the town’s mayor, injecting just enough exaggeration into her performance as a politician so that we are never quite sure how self-deluded the character is.

At least with the mayor, a parallel with a current world leader is clear. It’s the other roles searching for contemporary resonance that prove a problem. Miller’s work on the piece is from the 1950s, while the production’s poster promises us Donald Trump’s America. The treatment feels old-fashioned, the dialogue clunky. There’s talk of radicals, insurgents and free thinking that cries out for refinement. A couple of potentially interesting points – the role of religion and the doctor’s intellectual superiority complex – could have been made far more challenging. Didactic in the original, the message is still clear, but too many annoying details get in the way of any lesson.