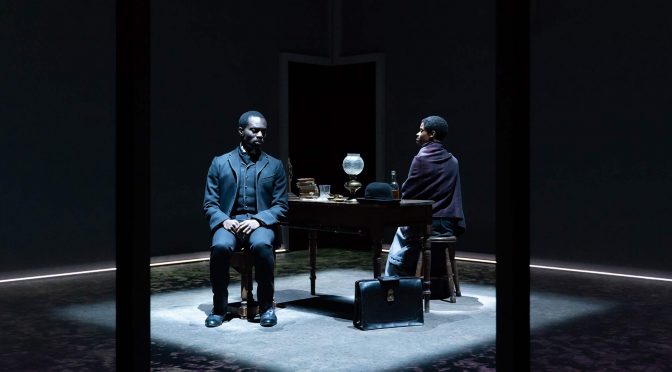 Trying to tackle colonialism and religion, along with sexism and education, could easily overwhelm a play. But this assured work from Danai Gurira, directed with inspired steps by Ola Ince, takes all these big topics in its elegant stride.

The key to success might come from specificity: the play focuses on the distinctly Catholic experience of a single woman, Jekesai, alongside the history of one uprising in the Zimbabwe of 1896. The characters are all local and their culture is explored in detail, with complex results that are rich and satisfying. It’s an in-depth look, from many angles, complemented perfectly by the decision to stage the show in the round.

Letitia Wright makes Jekesai’s conversion believable – and that she sees the opportunity for power and representation through religion is an exciting spin, as Christianity literally saves her from a marriage of convenience. Quickly becoming the protégé of Mr Clifford, who aspires to be a priest, this is a central relationship that’s as moving as it is layered. Clifford is given a superb realisation by Paapa Essiedu. Full of repression and conviction, for all his weaknesses he’s a hero of sorts. With the pair seen as collaborators of the colonists, and therefore targets, the theme of religious persecution is given a forceful twist. Two strong female characters accentuate the complexities of locating dissent. Pamela Nomvete plays a servant who pays only lip service to her master’s religion, while Luyanda Unati Lewis-Nyawo is the blue-stocking Miss Prudence ready to provide a feminist perspective.

The one exception to a generally old-fashioned feel is to include a lot of a local language, which highlights linguicism with great dramatic skill. Gurira bolsters the point, again skilfully, with the Queen’s English that the play’s westernised characters speak. There’s humour in mistakes in syntax and endearing precision, but the connection between power and language is clear and thought-provoking. The struggle with speaking is one of many carefully developed investigations of imperialism. But views never feel forced on characters (true a “signifier” slips in once) and a believably late Victorian feel indicates thorough research alongside theoretical thinking.

Among all the issues, Gurira hasn’t forgotten the basics, and The Convert is a well-crafted, traditional piece. There’s a set of strong characters that the performers get their teeth into and a powerful plot that builds tension marvellously. In short, it’s a gripping story about people you really care for.