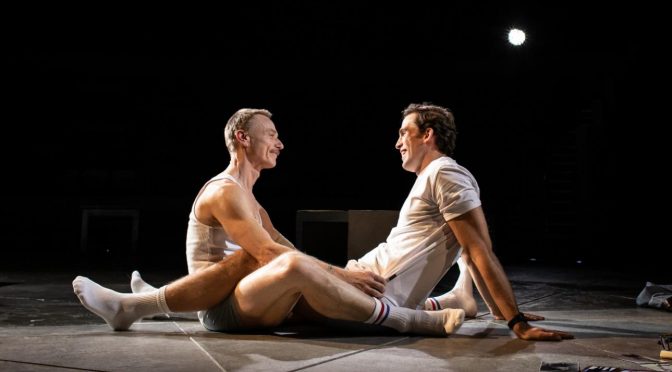 Several theatrical responses to the AIDS crisis might be labelled ‘ground-breaking’. Epics by Tony Kushner, or the recent marathon effort from Matthew Lopez, as well as William H Hoffman’s As Is, could all make the claim. Larry Kramer’s play from 1985 deserves the label, too. But, as this excellent revival inadvertently demonstrates, breaking ground doesn’t always age well.

There’s no doubt you will be moved by the central love story between characters Ned Weeks and Felix Turner, played by Ben Daniels and Dino Fetchser with such tenderness. The usher who told me to get some tissues ready knew what she was talking about. Fetchser is brilliant at showing romance alongside his character’s illness, while The Normal Heart marks a career high for Daniels – it’s an extraordinarily demanding role that he delivers with conviction.

As Weeks starts to campaign for research into the then new disease his partner suffers from, Daniels makes the urgency and desperation palpable. The history of neglect in the early years of the AIDS crisis is still shocking. With the help of Liz Carr’s Dr Brookner, the advocacy organisation Weeks helps found makes the play a microcosm for the topic of activism. Almost incidentally, there are strong characters for Daniel Monks, Danny Lee Wynter and Luke Norris, who show different personalities – and arguments – within the campaign.

Weeks’ anger and energy are phenomenal (the role must be exhausting) and driven by a fierce intellect. The play addresses issues of identity and community, reflecting political tensions through energising polemic. The ideas are interesting, although Kramer’s handling of them is far from even. And there’s another strong role when it comes to Weeks’ calls for acceptance: scenes with his brother, played so well by Robert Bowman, could be explored further.

For all director Dominic Cooke’s efforts to emphasis activism and Weeks’ abstract thinking, neither is what the play is about. The piece has such a definite purpose that a tension within the revival becomes increasingly clear.

The Normal Heart was political in a very direct way. With its statistics and documentation, Kramer wanted to educate and hold others to account. He wanted to incite action and inflame emotion. Debates are detailed. The pressing question was how to best get results. No matter how skilfully conveyed, that question is no longer relevant. Even the staging in the grand Olivier Theatre feels incongruous, despite Vicki Mortimer’s cleverly stripped-back design. A show with the capacity to tour smaller venues feels like the intention.

Written as a call to action for an event now thankfully past, both play and production command respect but feel lost in the present.