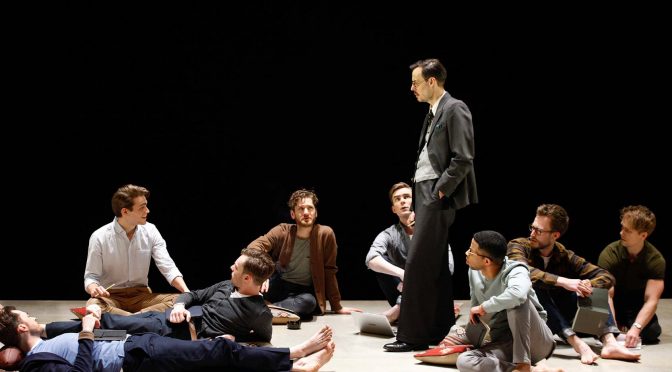 Here’s a little idea: in times of cultural crisis, heroes are needed, and for Liberals they don’t come bigger than EM Forster. In Matthew Lopez’s play, about America but receiving its premiere in London, the Edwardian novelist appears on stage – portrayed with extraordinary skill by Paul Hilton – mentoring a group of young gay New Yorkers as they tell their stories. The clash of cultures is fun, adding a light touch to serious content that ranges far and wide. Played over two parts, with a marathon running time of nearly seven hours, perhaps the highest praise is that not a moment is wasted or uninteresting.

The Forster classic that the play is so very consciously in dialogue with is the 1910 Howards End. Lopez has characters narrating, shaping, scripting and performing events, a method that comes close to a combination of novel and play that is formally innovative and highly engaging. Action follows the book closely as sensitive artistic types (the Schlegels for Forster) come into contact with the world of commerce. Negotiating an update is full of wit. And thought provoking, too – when parallels become too forced, characters fight against what comes next. A reservation: it’s essential to know the book well to appreciate all this. The rewards include the novel’s titular abode transformed into an informal AIDS hostel – a stroke of imaginative genius that proves particularly moving.

The house is the base from which Lopez explores the inheritance in his title: the legacy of the AIDS epidemic and its relation to the gay community. History is alive and hauntingly literal for Lopez, which results in a truly stunning ending for Part One. Arguments are laid with ferocious intelligence and passion. A sense of fear about the current political climate results in inspirational calls to action – this is a play with a mission. It’s clear director Stephen Daldry is on board, treating the text with reverence: every joke is played for all its worth, each rallying speech given space. Daldry’s staging, imbuing more grandeur than the text requests, emphasises what an event the show is. Beautiful, too, bathed in a golden light by Jon Clark.  Similarly, the conviction of the performances is humbling, as a strong ensemble creates a chorus of supportive friends, loved ones and artists.

One Eric Glass is the emotional heart of the piece (the lead Schlegel, if you will) and a hugely appealing creation that makes for a career-defining role for Kyle Soller, who is riveting throughout. Lopez retains the name of Henry Wilcox, transforming him into a billionaire property developer, giving the character great weight, and the performance from John Benjamin Hickey does this justice. Oh, and Vanessa Redgrave has a part, too – an extended version of the housekeeper Mrs Avery. Of course, it’s exciting to see her on stage (and a blissful nod to the Merchant Ivory film) but, no matter how small the role, it’s testament to the production that even Redgrave can’t overwhelm the play.

Lopez gets tricksy when it comes to the role of Forster’s clerk Leonard Bast. Some elements of his role are shared out, his famous umbrella threw me, and taking on some of his aspirational characteristic is Toby Darling, rendered vividly by Andrew Burnap. Playing a self-destructive writer, trying hard to win an award as the ultimate narcissist, there are plenty of laughs. Toby’s own inheritance, an abusive childhood, lingers over the play and, while Burnap handles the scenes well, they feel like a loose end. Meanwhile, the parts of Leo and his doppleganger – a wealthy actor called Adam – are both performed by Samuel H Levine. All actors play more than one role but the flipping between parts for Levine shouts his talents deafeningly.

In the novel, Leonard is pivotal to deflating authorial grandiosity. The character retains his dignity and questions the role of art. Abandoning this, Lopez takes on a pious tone. Leo’s life as a member of an underclass – a prostitute who gets involved with drugs – brings us the play’s darkest moments, coming close to misery porn. While Leo’s end is ultimately happier than Leonard’s, it feels unrealistic. And it gives rise to surprisingly crass points on inequality. An earnestness pervades the play – it’s a fault some find in Forster, too – that makes it all a touch High Table. The humour that seeks to compensate doesn’t have Forster’s bite or finesse. The dialogue, rooted in contemporary privilege, might sound as foreign to English ears as anything Edwardian – which is interesting in itself – but some scenes, surely destined for auditions, feel like contrived set pieces.

While the conversation with Forster’s novel is fascinating, a final assessment of Lopez’s play rests on what he does with his inspiration. Current political concerns, social injustices and Trump trauma are all thrown in, sometimes messily. The legacy of AIDS, so sensitively handled, engulfs the play. Connections to Tony Kushner’s Angels in America are clear, but that’s another blog! An epilogue, which doesn’t leave a dry eye in the house, is when we arrive at a fantasia and when the play becomes its most aspirational. Concerning itself with the widest of societal connections through the personal, struggling so hard to connect the prose and the poetry – in the here and now – is the biggest lesson learnt.