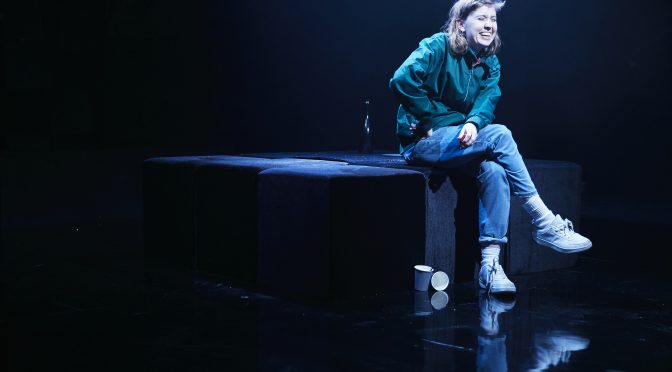 Damsel Productions is an exciting young company on to a winner with Izzy Tennyson’s new play. Rolling up its sleeves and getting… well, very dirty, this show answers the palpable need for diversity and work from women on stage. So the first thing to say about Grotty is that you should go!

Tennyson guides us through a world seldom depicted – the lesbian sub-culture of East London – with fierce intelligence, wicked humour and a throbbing heart. The play is funny, but this isn’t a fun trip. Taking to the stage as “sad little lesbo” Rigby, Tennyson leads us on a revelatory journey about youth today. There’s a litany of millennial woes providing five-star laughs – from Facebook to flats – arguably more than enough for any coming-of-age story. But the major concern isn’t sexuality – it’s mental health. The “chronically disheartened” Rigby dangerously self-medicates, and the play is frank and frightening in its personal telling of this increasingly important issue.

Tennyson’s writing is invigorating, showing a yen for the macabre and a strong sense of the theatrical that some might feel needs tempering. There’s a lack of polish, which it’s tempting to suggest is a perverse, stubborn idea about being radical. But the raw ideas are profuse, exciting and profound. The script overreaches, but director Hannah Hauer-King does a good job at restraining it; her use of the performance space is brilliant – sympathetic to the script and aiding clarity.

For all her bad posture and face pulling, Tennyson is incredibly magnetic. Her observational comedy is spot on, her talent for satire considerable, and she is a real original. Too many lines are hurried, there aren’t enough pauses for some great jokes, but I was transfixed by this performance. Her fellow actors often do better at the technical delivery of her words. With fewer idiosyncrasies, Rebekah Hinds and Grace Chilton put on a fine show as ex-lovers who have affairs with Rigby in turn, making a plot line crying out for elaboration work. And Anita-Joy Uwajeh is superb with her transformations into three roles.

So what really is grotty? It’s not the play’s explicit sexual content. Although Rigby’s encounters with symphorophilia are darkly hilarious, her definition of lesbian sex is one of the funniest things I’ve ever heard. What’s grotty turns out to be the connections between people: the characteristics and insights we pick up from lovers, the inheritance of our experiences. And this idea is, frankly, a downer. What happens to the capital-letter Self from such a premise? In Rigby’s demented, disturbing struggle, Self is compromised and objectified, becoming “an experience rather than a person”. And defined by work – “I am an intern” is the drug-induced cry – not an identity, just a job. Add a matricidal urge that would have a psychoanalyst doing cartwheels, leading to a twist brilliantly handled by Hauer-King, and we come close to being lost in Tennyson’s psyche – so compelling does it become. But the real kicker is this fear of connection when applied to a Structuralist simulacrum that offers love – a meeting with another, I suspect that should be an Other, who mirrors Rigby. And is rejected. At this point you just want to hug the girl. Not so much grotty as grim – but brilliant at the same time.