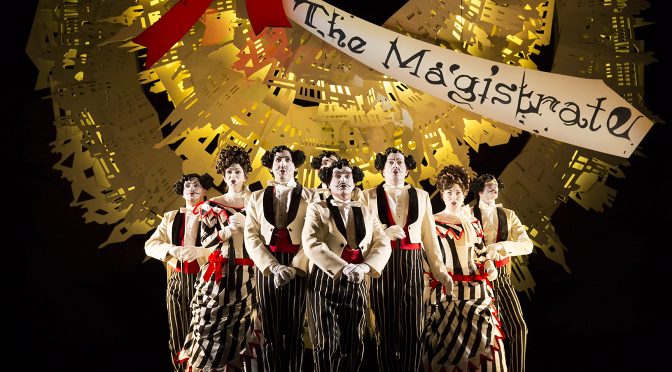 Stepping into a gap in the National Theatre’s schedule left by the cancellation of The Count of Monte Cristo, Timothy Sheader’s production of The Magistrate may be a last-minute stocking filler – but it doesn’t feel like one. Packed with laughs and polished to perfection, it’s a real gift for the Christmas season.

This is a theatrical achievement all the more impressive because Arthur Wing Pinero’s 1885 play isn’t all that great on the page. When Agatha marries Aeneas Posket, she lies about her age and turns her son, Cis, from a 19-year-old man into a 14-year-old boy. The ‘larks’ he gets up to drop the whole family, and any passing female, into deep water, forcing his new step-father, a Magistrate, to get involved. The exposition could be slow and the satire weak, but Sheader fills the show with energy, kicking it into life and giving the National’s last hit comedy, One Man, Two Guvnors, a run for its money.

Of course, comedy is all about timing and The Magistrate‘s wonderful cast excels at this: from the excellent Beverly Rudd, who shines in the small part of Popham the maid, to Jonathan Coy, who plays an Army Captain from Agatha’s past with enough bluster to steal a scene or two, and Joshua McGuire, who gets great laughs as the young son “swelling with agitation” as a result of the five years taken off his age. With so much talent on stage it seems that John Lithgow, who takes on the title role, needs to grow into his part a little – he’s certainly upstaged by his wife, played by Nancy Carroll, in absolutely fabulous style.

Musical interludes with lyrics by Richard Stilgoe (with a nod to Gilbert and Sullivan) add even more fun, and the sets from designer Katrina Lindsay are magnificent – pop-up fantasies that make the most of the Olivier stage, they hint at Christmas cards. But this show is so good that it’s not just for Christmas and should entertain for a long time afterwards.

Written 23 November 2012 for The London Magzine