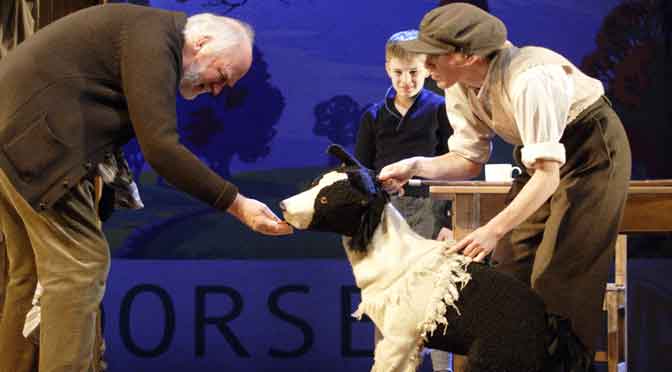 Goodnight Mister Tom arrives in London’s Phoenix Theatre on Charing Cross Road after strong reviews at Chichester and before embarking on a UK tour on 26 January. David Wood’s skilful adaptation of Michelle Magorian’s best-selling book about the relationship between a young evacuee and an elderly widower is a surprisingly challenging and dark tale that’s wonderfully theatrical and hugely entertaining.

Starting with Operation Pied Piper, in 1939, when nearly three million were evacuated from cities into the country, our hero William Beech is a troubled young boy from an abused home. His deeply shocking treatment at the hands of his own mother shoots through the sometimes sickly nostalgia of the piece to give it real bite. William is ‘billeted’ with a reclusive and curmudgeonly old man. It is, of course, their slowly warming relationship that makes Goodnight Mister Tom a tale of redemption for both of them.

The play’s two roles for children, William and his friend Zach, are both hugely demanding, and the youngsters performing on the press night, Ewan Harris and William Price, were impressive indeed, but praise has also to go to the creative teams and the adults in the cast who so skilfully support them. Angus Jackson’s clever direction, the clued-up ensemble who take on a variety of roles, and the clever use of puppetry from Toby Olié make Goodnight Mister Tom a slick affair. In the title role Oliver Ford Davies is marvellous and he has a rapport with his young co-star that will melt your heart.

Written 28 November 2012 for The London Magazine