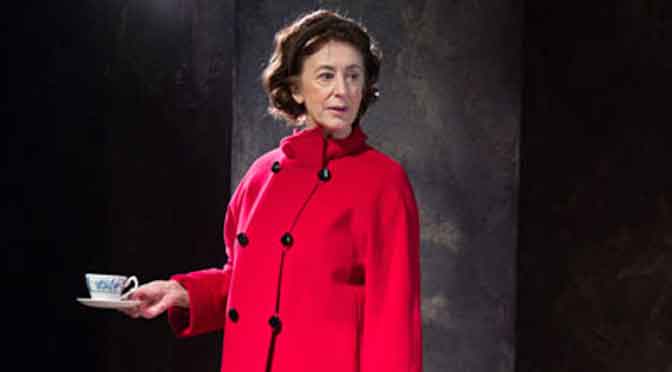 Old Money, a new play by Sarah Wooley, marks the end of a fantastic year for Hampstead Theatre. Taking on this young writer is to Artistic Director Edward Hall’s credit; he’s spotted a quirky talent and a play full of fun, with serious points, that maybe a little rough around the edges, but is well worth watching. And that’s not to mention its star attraction – Maureen Lipman in fine form and not to be missed.

The story of three generations of women, Pearl, Joyce and Fiona, is rife with humorous conflict and includes a slight touch of fantasy. An unhealthy family triangle is complicated when Joyce becomes a widow and embraces her new freedom by making friends with a stripper. There have been plenty of dramas about baby boomers lately, but Wooley seems more interested in simply telling a good story – this is a tale of the unexpected and hugely entertaining.

It is not without problems. Everyone touched by the old money Joyce married into seems pretty objectionable – their selfishness seems hard to believe. And surely even the suburbs of Surrey aren’t quite as sheltered as Wooley makes out? The matriarch Faith’s hold over her daughter is dubious, while Joyce’s own spendthrift child Fiona seems bitter because she lives in a maisonette in Colliers Wood – bad, but not unbearable. As for the men in the piece, you start to suspect Wooley has some axe to grind in making them all so useless and unpleasant. But the problems aren’t all from Wooley’s script; surprisingly, the experienced director Terry Johnson seems flat-footed and fails to keep up the pace the play deserves.

However, Wooley’s humour is spot on, with plenty of laughs and observations that ring true. Best of all, the performances in Old Money are superb. Helen Ryan is a crowd-pleasing termagant and Tracy-Ann Oberman is superb as a grasping 40-something. Of course, it’s Lipman’s show and her character’s journey to fulfil long-delayed dreams, battling against various roles she is forced into, is performed wonderfully. The perfect comic timing we expect is there accompanied by breathless pauses and hesitations that show Lipman is in total control. Joyce isn’t an inspiring figure, the play is too complex for that, but Lipman makes her, and the play, very much alive.

Written 6 December 2012 for The London Magazine