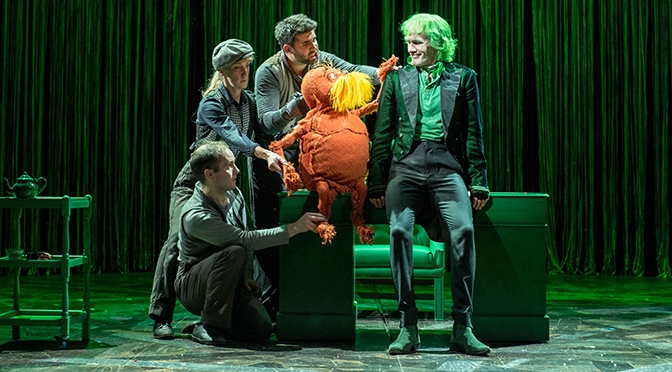 Legendary children’s author Dr Seuss’s environmental fable, of the titular forest creature who tries but fails to save trees from a fanatical businessman called The Once-ler, is a surprisingly joyous and thought-provoking piece. With inventive theatricality, director Max Webster’s production should please the widest of audiences with puppetry, songs and spectacle, all in rhyme, with both laughs and tears along with way.

If there’s a fault, you wouldn’t describe Charlie Fink’s effective and eclectic songs as quite top notch. But The Lorax isn’t quite a musical. And it would be hard not to focus on David Greig’s adaptation for the stage. The expanded script is in the Seuss spirit – you can feel the great man smiling down on Greig – with lovely modern twists. The inventive and intricate language keeps your attention, with smogulous smog-polluting factories replacing the truffula trees – felled to produce useless thneeds – this show is biggerer than Christmas.

Comfortably short of preachy, the important message is delivered intelligently. Greig’s masterstroke, aided by Simon Paisley Day’s energetic performance, is to show The Once-ler’s argument. Progress has a point and though The Once-ler brings disaster, his motivations aren’t all bad. We get to see how he is corrupted, and the show’s best number is with his lawyers, McCann, McGee and Von Goo. As for wider complicity, there’s the media and consumers who become distracted from The Lorax’s protest by a pop-fuelled fashion show.

Of course it’s The Lorax who is the star and guaranteed to win hearts. Performed by Laura Cubitt, Ben Thompson and Simon Lipkin, who also voices the character, this is a hero remarkable for his sensitivity and simplicity, as well as (hurrah), age and moustache. The puppetry in the show, masterminded by Finn Caldwell, is superb, perfectly matching Rob Howell’s clever design. The Lorax speaks loud and proud to all and it is to be hoped that many get to hear him.