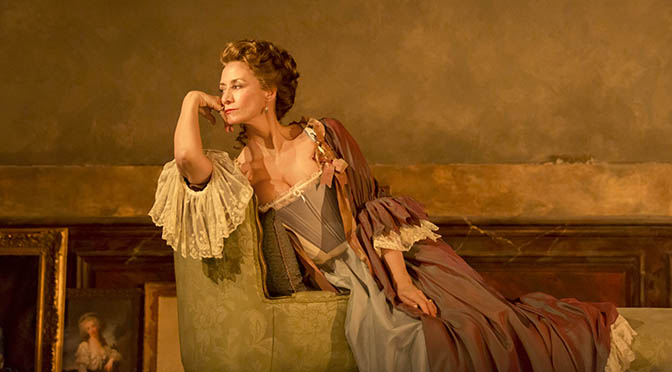 It’s odd that Christopher Hampton’s hugely successful adaptation of Choderlos de Laclos’s epistolary novel is receiving its first West End revival since it opened back in 1986. Josie Rourke’s production provides an opportunity to see a brilliant transformation to the stage that shouldn’t be missed. Hampton’s delight in the plots of seduction, betrayal and sexual politics, along with the exquisite characters and dialogue, are blissful.

It’s a testament to the strength of this text that Rourke’s direction disappoints by not getting the maximum from it. Arch plotters Valmont and Merteuil, planning love affairs for fun and revenge, are played by Dominic West and Janet McTeer. And, it should be stressed, they are played very well indeed. West brings a forceful sexuality to the role that makes it easy to believe in his character’s success as a lothario. McTeer’s is a more layered performance, having a great deal of fun as she uses Valmont’s sex, as a weapon, against himself. McTeer is playful, a cunning coquette, but when she needs to, reveals the uncomfortable truths Laclos highlighted about the position of women in society. So where’s the problem? Very much star vehicles, West and McTeer dominate the production too much.

True, the other characters are creatures in their games, but smaller parts, especially their main victims Cécile and Madame de Tourvel, should stand out more. Morfydd Clark and Elaine Cassidy struggle to leave a mark, creating surprisingly little sympathy as their characters’ respective innocence and piety are broken. The production makes it hard to believe that Valmont finally falls in love and is uncomfortably blasé about the creepy seduction of a 15 year old.

Which indicates another problem, albeit an unusual one – the production is too funny. The deliciously wicked Valmont and Merteuil gain plenty of laughs. It’s superbly done – Valmont’s brazen hypocrisy is a delight and McTeer makes nearly every line a quotable gem of bitchy cynicism. But there’s a penalty for this, with little tension between the two of them and too little time for the play’s darker overtones. Nearly all end badly but, rather than tense, the evening is simply deflating. Though much of the production is brilliantly done, these liaisons aren’t really dangerous enough.