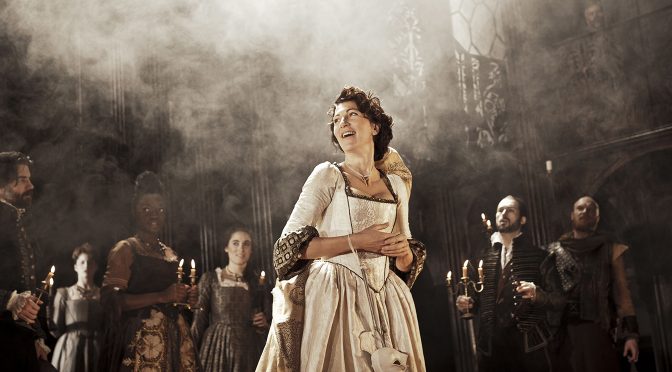 The stage is set for high drama at The Old Vic with Jamie Lloyd’s new production of The Duchess of Malfi. Soutra Gilmour’s set excites at first, with accomplished lighting from James Farncombe, but it quickly tires. This gothic fantasia lacks subtlety and isn’t versatile enough – at one point it seems to snow inside a palace and, worse still, it has a cardboard cut-out feel that is unfortunately reflected in some of the performances.

Placing the focus on John Webster’s text, shouting the play’s complexity and trying to challenge our ideas about Jacobean revenge stories, Lloyd creates an exceptionally clear production. Clarity isn’t usually a fault but you can take anything to an extreme: much of the cast’s delivery becomes heavy and laboured. Lloyd is too good a director to make The Duchess of Malfi tedious but what should be a gut-wrenching ride of a play is too often halting.

There are important exceptions. Mark Bonnar plays the villainous Basola with great complexity. His treachery towards the Duchess and her steward (a fine performance from Tom Bateman), whom she has secretly married, is multilayered.

In the title role, Eve Best’s performance is never less than superb. It’s clear that for Lloyd her character is more than the victim of gruesome torture – she is a shinning light of humanity. Best is impressively natural, given the difficulty of the part. Believable as a real woman as well as a symbol of dignity, her performance saves the play.

Written 29 March 2012 for The London Magazine