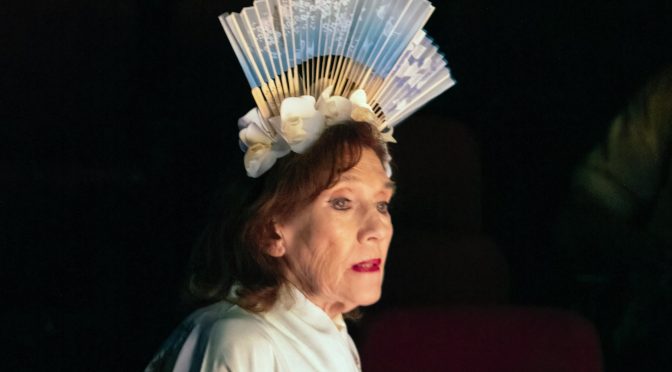 It takes courage as well as expertise to tackle this 1963 play by Tennessee Williams. Director Robert Chevara has the bravery and expertise to do the job but there’s no pretending this a show for everyone.

Williams’ overwrought, some might say overwritten, script suffers from his own biography (the programme contains a note to that effect). The playwright’s reputation weighs heavily over the work. Take the lead – an aging, addled Southern Belle called Flora – who could be a cliché of earlier writing or, too temptingly, a reflection of Williams’ life.

The Milk Train Doesn’t Stop Here Anymore is rich in symbols and ideas, with dialogue so convoluted it can seem ridiculous. It’s a meditation on mortality, with a terminally ill heroine who’s out of her mind and another character nicknamed The Angel of Death, who is really a (pretty bad) poet. And it’s one of Williams’ ‘memory plays’ as Flora recounts her “demented memoirs” out loud. What kind of a book that would be is a puzzle; ambitions to be another Proust indicate that what she is writing, in snatches, is more fiction than fact. But, as Flora’s grip on reality weakens, she comes to believe her own legend… maybe.

Chevara gives as much guidance as he can. The production is hampered by a set from Nicolai Hart-Hansen, separating locations in Flora’s Italian villa to little effect. But Chevara makes the piece tense and tender – neither quality easily achieved – and he has a commendable view about the humour in the piece.

“A witch and a bitch”

The production has strong performances that win respect. The star casting of Linda Marlowe and Sara Kestelman, as Flora and her ‘friend’ The Witch of Capri, is exciting. Kestelman is superb with the waspish humour so many Williams fans adore. But the catty remarks – which are very funny – are handled with restraint. This play shows a serious side of camp, and that is one of its many challenges.

Marlowe’s Flora is fragile and builds to ferocious as death approaches. Generating surprising sympathy for this “dying monster”, Marlowe also aids suspense. Flora declares, “everything is urgentissimo this summer”, with the aim of taking a lover – quite literally – on her death bed. How’s that for uncomfortable?

Sanee Raval’s role as Chris Flanders, that so-called Angel of Death, sums up many of the difficulties with the play. More credit to him for his performance. The role is caught between the real and the symbolic. Raval’s performance shows intelligence as the character starts to believe his own myth, while being aware it is one constructed by Gothic gossip.

The Milk Train Doesn’t Stop Here Anymore is extreme to the point of crazed, so you need a director with a very firm hand in charge and an open mind (ready to be blown away) to watch it. Of course, the theatre can only provide one of these. Be prepared to work if you go to this one.

To give Tony Kushner’s play its full title – The Intelligent Homosexual’s Guide to Capitalism and Socialism with a Key to the Scriptures – is to sell it short. This is a history of left-wing politics and activism in the US that sweeps across the whole of the 20th century. And it’s also a family drama of parodic contemporary complexity that turns into a meditation on death. Thanks for the abbreviation, but it’s “iHo, iHo and off to work we go” with such a dauntingly demanding piece.

It can be hard to connect with characters taking abstract ideals so seriously, but Kushner makes Communist Party member Gus convincing, and asks us to question why the values he has lived by might feel alien. A kind of leftist Willy Loman, Gus is a superb role in which David Calder excels. The declaration that he is soon to take his own life sends his family into a spin and adds mounting emotion to the text. Dividing the house among his children, each of whom make King Lear’s kids look positively benign, brings secrets out of the woodwork, adding further tension.

Gus’s sons Pill (Richard Clothier) and Vito (Lex Shrapnel) are joined by Tamsin Greig, who plays his daughter. She’s the favoured child, heir to all that theory, and, as the play grows, her increasing concern with mortality sees her performance gain in strength. Along the way the sibling dynamics provide a lot of humour. I-Ho is very funny. The younger generation’s complex personal lives (let’s just mention Pill’s affair with a prostitute, confirming Kushner’s obsession with commodification) and their academic partners provide a lot of laughs, with outrageous narcissism and jargon-laden chat. I’ve a theory they’re all imprisoned by identity politics: a trend that’s ripe for exploration.

The part of Aunt Clio provides such a blast for Sara Kestelman that it’s a real highlight. Once a nun, then a Maoist and now moving on to Christian Science, she’s described as addicted to the “metaphysical crack pipe”. With characters like her it’s hard not to love the play. But a warning is needed: nothing about i-Ho is easy. More than one scene has the large cast talking over one another. It’s masterfully handled by director Michael Boyd but proved too much for some audience members. It feels as if Kushner is cramming more than one play into the night. Each of the three acts here would have been satisfying. Cumulatively, by the end of three hours, if you managed to keep up you definitely deserve a certificate. 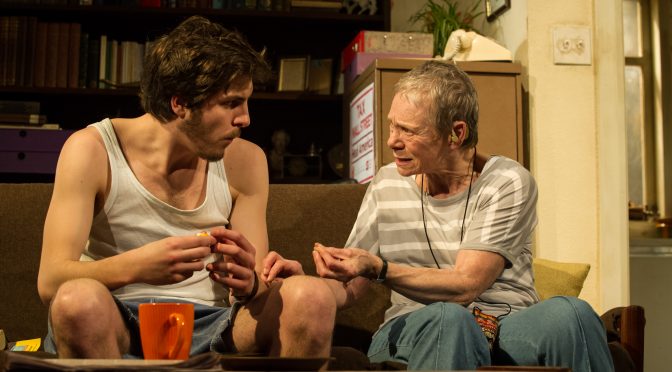 Notting Hill’s Print Room has secured another theatrical coup, working with the Ustinov Studio at the Theatre Royal Bath to bring the UK premiere of 4000 Miles to London. Winner of multiple awards in the US, Amy Herzog’s play involves the relationship between elderly Vera and her grandson Leo, who unexpectedly pitches up at Vera’s New York apartment having completed a cross-country bike ride marred by tragedy.

Nurtured by his grandmother’s presence, the young man’s emotional journey is just beginning. It’s a modest premise, perhaps, but, with superb performances from Daniel Boyd and Sara Kestelman, love, life and death are observed with such a realistic eye that the play is fascinating.

The simple story is elevated to extraordinary theatre by Herzog’s characterisation and James Dacre’s precise direction. Each scene, though dealing with the mundane is never ordinary, as the subtle, detailed observations build. The cast rises to the writing with Boyd and Kestelman joined by Leo’s love interests, both wonderfully drawn and performed by Jenny Hulse and Jing Lusi, although it has to be admitted that the latter steals the show for comedy value.

Herzog never stereotypes her characters – an especially impressive feat considering the politics in the play. Vera is an old Communist, Leo a new age hippy, and fun is poked at both. But Herzog is less concerned with single-issue politics than with the nature of our responsibilities to one another. Recognising the difficulties of both old age and youth, with plenty of wry comment to entertain, 4000 Miles shows different generations finding common ground in an original and moving manner. A remarkable achievement.