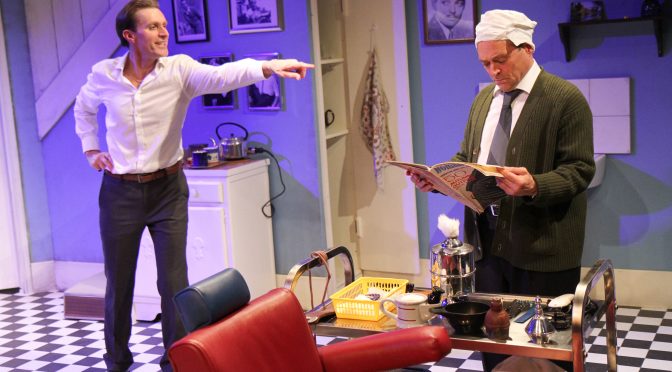 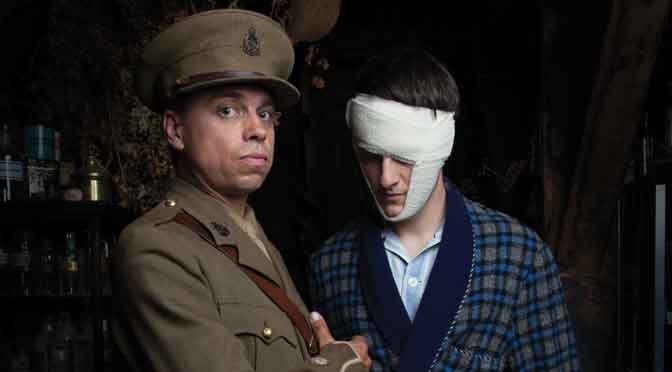 Howard Brenton makes a return to Shakespeare’s Globe with a new work, the accessible and entertaining Doctor Scroggy’s War, which opened last night. Typical of the venue’s strong commitment to contemporary writing, it also serves to commemorate this year’s anniversary of the start of the First World War.

The play tells the story of two battles against adversity. Jack Twigg, a bright working class boy, enlists in the army, becoming a “temporary gentleman”, allowing Brenton to examine class and patriotism in one swoop. And secondly, there is the story of the real life Dr Harold Gillies, a pioneer in plastic surgery and a remarkable man who fought to heal the minds, as well as the faces, of his patients disfigured in conflict.

There can be few aspects of the War that haven’t been explored by dramatists. Brenton seems to embrace the predictable, a dangerous move, having fun with incompetent toffs and adding a liberated heroine for Jack’s love interest that wouldn’t be amiss in Downton Abbey. Humour is aimed for but too often the plot overrides the jokes. For all director John Dove’s speedy approach, the action feels a little slow at times.

Having worked himself into something of a hole, Brenton does a good job of making the second half much more interesting. To the rescue is Gillies and his alter ego Doctor Scroggy, a caricature Scot who brings fun to the hospital with am dram and alcohol. Gillies explores new techniques in surgery and Brenton becomes more novel as well; looking into questions of identity in an unsentimental fashion and highlighting the fact that, despite their sacrifice, these soldiers often had no regrets.

The dialogue is irreverent – Brenton has fun with the language of the period but this is a joke that wears thin. An adventurous scene that depicts a barrage before going over the top of the trenches is better. Most impressive are direct addresses to the audience, perfect for the Globe, that provide a connection with the characters that is strangely absent as we watch the bare bones of events.

None of these reservations detract from a fine production. The music from William Lyons is of note. Some performances are, deliberately, broad. Credit to William Featherstone as Jack, especially with his face bandaged (believe me, that’s not a plot spoiler) as well as Joe Jameson as Jack’s friend Ralph. Paul Rider stands out as Field Marshall French, although I suspect the role is easy work for such a talented, well cast actor. Final applause goes to James Garnin, who takes on the title role with spirit doing justice to Gillies, whose achievements and eccentricities save the play.

Written 18 September 2014 for The London Magazine 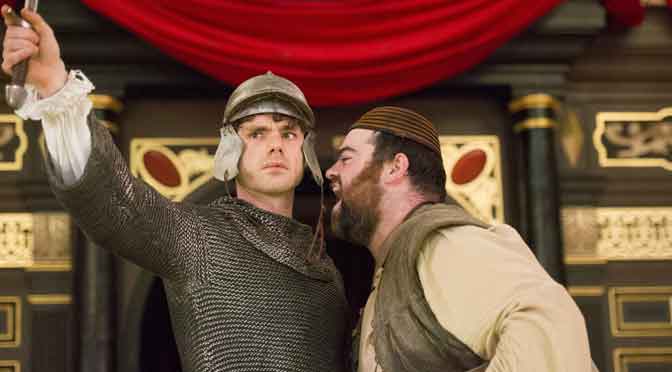 The second production at Shakespeare’s Globe’s Wanamaker Playhouse is Francis Beaumont’s The Knight of the Burning Pestle. Written in or around 1607, if you haven’t heard of the play, its startling post-modernity will blow you away. For those already in the know this is a clear, clever choice for the new theatre that shows it off to its very best. And just in case you aren’t interested in literary history, it’s also a cracking night out that will have you in fits of laughter.

Taking their seats in the pit two citizens, played by Phil Daniels and Pauline McLynn, take objection to the entertainment on offer. “Something troublesome” in their ignorance of the performing arts, they’re the first source of fun. One couple you don’t mind making a noise in the theatre, offering around grapes and sweets, a restrained performance from Daniels allows McLynn’s to shine as the adorable, if occasionally blood thirsty, matron who invites us all to her house for a drink afterwards.

Commandeering the stage the stage, they want something that praises their profession and enlist their apprentice Rafe (endearingly portrayed by Matthew Needham) to take on a chivalrous role. And since they are grocers he becomes the titular Knight of the Burning Pestle. Beaumont’s satire on chivalric romances could easily be niche, but director Adele Thomas uses great comic performances from Dennis Herdman and Dean Nolan, co-opted as his squire and dwarf, to get the giggles; Pythonesque touches and acrobatic slapstick – anything and everything to make you laugh.

At the same time, the players valiantly continue the original play, about a London merchant. Another contemporary satire, its critique of greed in the city is sure to hit home today. A story line about an apprentice in love with his avaricious master’s daughter, is hammed up marvellously by the talented John Dougall and the superb Sarah MacRae. Their duet in song is a real highlight of the night. All the interruptions create an improvised feel full of fun, and frequent musical intervals add to the jolly atmosphere.

Believe it or not, with all this going on, there’s another important theme within The Knight of the Burning Pestle. Again commented on by the citizens, again brought out marvellously by Thomas: the character of Merrythought, performed commendably by Paul Rider, is a mysterious figure of mis-rule, anarchy even, dedicated only to mirth. Thomas identifies this as the play’s keynote and makes it a deep, sonorous one. Remarkable musical numbers are just one element of using the new playhouse at its best; Thomas is like a child with a new toy – an entirely appropriate way of dealing with this text. A fascinating play fantastically directed.

Written 28 February 2014 for The London Magazine