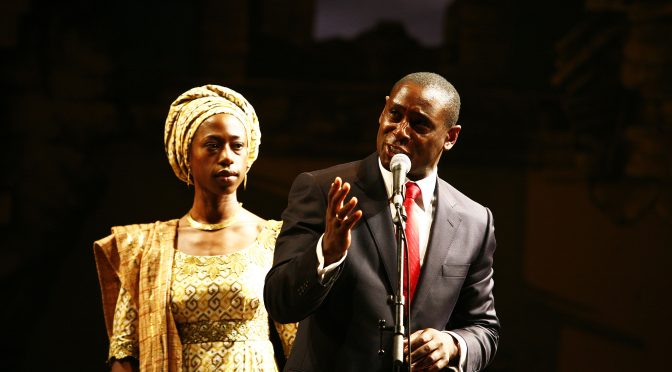 We all appreciate how annoying it can be when a phone rings during a performance. At the National Theatre they’ve really had enough of it; the start of its new production, Welcome to Thebes, has gun-toting child soldiers warning us to switch off our mobiles. We then hear the story of how one girl was raped before becoming a mercenary in her war-torn country. This is an uncomfortable mix and it is clumsily done. Unfortunately it sets the tone for the evening. From the very start of this play you might well want to call someone and tell them how bad things are.

Moira Buffini’s play recasts Greek myths to modern day Africa. The inhabitants of Thebes experiment with democracy after a devastating war and look to wealthy Athens to help them out. There can be no objection to reinterpreting myths (indeed there is a prestigious heritage of doing so) but Buffini’s efforts are a worrying failure. The contemporary setting isn’t specific enough to be politically satisfying and the mythical characters seem like lost novelties. Doing justice to the dangerous creativity of Dionysus and contrasting that with the arrogant politics of the Athenians would be enough to aim for without trying to draw unconvincing parallels to current events. To make matters worse, what is universal about myths – their emotive power – seems to have no attention paid to it at all, making the play dull as well as pretentious.

Richard Eyre’s direction makes the production as swift and tense as it can be but he has too much to work against. The cast battle valiantly and produce some good performances. The new government’s cabinet of ministers make up the chorus and the actresses do well to differentiate themselves. The opposition is formed by Pargeia (Rakie Ayola) and Prince Tydeus (Chuk Iwuji) – a fantastic power-mad couple brimming with sex and violence. Thebes’ new boss Eurydice (Nikki Amuka-Bird) and the visiting Theseus (David Harewood) also work well together and convince as very different types of leaders.

Achieving some electric mixtures of personalities on stage is no small achievement given the script and static set that the actors have to work with. The text varies crazily from the stubbornly prosaic, taking in scraps of poetry, to the painfully clunky. Having been welcomed to Thebes, take my advice and look swiftly for the exit.