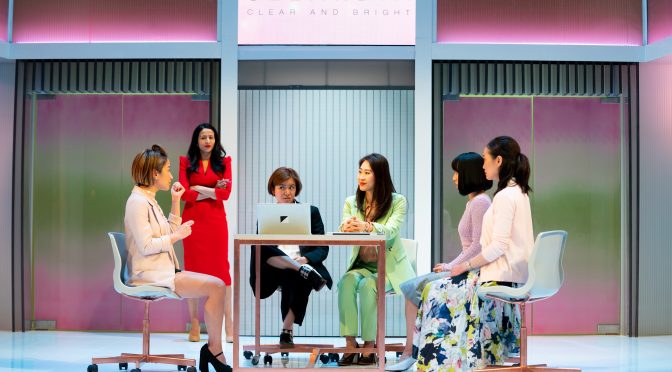 Anchuli Felicia King’s play has opened in Sloane Square while two more productions of it – in American and Australia – are being worked on. That the show is a global affair is appropriate to its themes. Set in the melting pot of corporate Singapore, with a multi-ethnic cast, it reflects worldwide concerns about global capitalism and social media through the prism of racism. Surprisingly, it’s a great deal of fun.

The content is serious. When a grossly misjudged advertising campaign for a skin-whitening cosmetic is leaked on to YouTube and, predictably, goes viral it is racism in the office of the manufacturer that is exposed. The ad was supposed to be funny, but the workplace and the online world become split around those who find it so. It’s the startup corporate culture, which sets about “selling whiteness” without a shrug, that really fascinates. Racism comes into conflict with the aims of a “global community” to create a better future for our shrinking world.

The women from different Asian counties – with their degrees of Westernisation to the fore – make a frequently hilarious case study that proves bravely risqué. Insults fly and they don’t all have wit as an ingredient. It’s pretty clear it only gets funnier the more you know about each culture in question. There are gasps and cringes that Nana Dakin’s direction maximises and the show speeds along nicely.

With a country resting on each role and sharp satire in mind, avoiding stereotypes – King’s stated aim – is intractable. Nonetheless each character is developed to a decent degree, even if the majority lack self-awareness. There’s no holding back with Built’s ex-boyfriend, though – a sponging French lothario that makes a fabulous role for Arty Froushan, who compares his broken heart to a child dying of leukaemia. He is wickedly funny with every line. What the women have in common is privilege. They’re all super smart and educated with money and connections. Having this elite as targets makes any schadenfreude extra delicious – most will see them as fair, if easy, game.

White Pearl does not contain the “twists and reveals” that it boasts. In truth, the story is thin (the plot around a second video and fraud are sloppy). And ironically, as King expresses valid concerns so common around the world, little in the play feels new. Rather, this is a piece full of sharp comedy observation and incredible details. King’s ear for accents is obsessive; Katie Leung’s performance as the only local woman, who slips between “dudebro-speak”, Singlish and Hokkien, is phenomenal – and funny.

The big questions raised are about humour, which is often said to be the hardest thing to translate and frequently a source of cruelty. King highlights this in a brilliantly performed scene with Priya laughing hysterically at Xiao who can’t stop crying. The jokes provide the play’s most challenging and original moments. What’s funny is the take-home question. It’s posed as a threat. But also, perhaps, a possibility. Jokes cause a pause in, or at least question, the globalisation we see in the play. And an interesting idea arises that humour could save us from homogeneity.