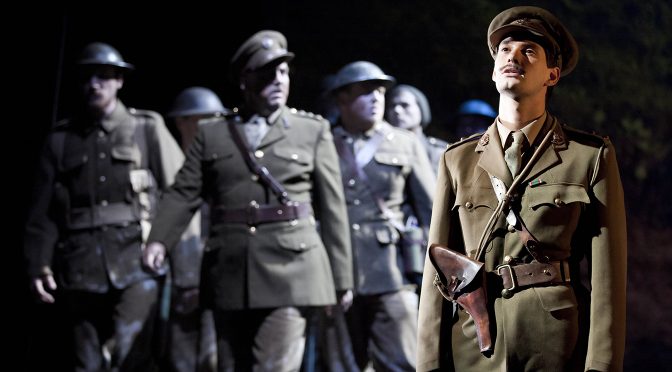 Sebastian Faulks’ much-loved 1993 novel, Birdsong, was one of those books you saw everyone reading on the tube. A page-turner with depth, it seemed to cry out for an adaptation. Rachel Wagstaff’s version, now showing at the Comedy Theatre, is a dutiful effort that should please fans of the text.

The stage version certainly doesn’t plod. The first act deals with our hero Stephen Wraysford’s affair with Isabelle Azaire. They fall in love while he is staying with her and her husband in northern France, run off together and then separate, all in fifty minutes. Action then moves to the trenches of the First World War, where we see Stephen as a broken man. The Armistice heralds his final encounter with Isabelle, culminating in a tenuous yet beautiful sense of reconciliation.

Wagstaff packs too much of the novel into the evening and should have been more adventurous with her selection. Like John Napier’s clever design, which literally emphasises the book, the three-hour show seems intimidated by the novel’s success. You start to think a mini-series might have been a better idea: TV would have more time for the story and it would solve the problem of canned birdsong, which is never going to ring true in the theatre.

Trevor Nunn’s direction is fascinating. Nunn has learned lessons from his recent success at the Menier Chocolate Factory where the small size of the venue led to an intense production of A Little Night Music. Now, in Birdsong, he concentrates on the intimate scenes appropriate to a love story. The danger is that these occasionally look a little lost on a West End stage, but the strategy is sound – he is playing to the production’s strengths, namely, the cast.

Birdsong brims with quality performances. Nicholas Farrell plays Isabelle’s betrayed husband and then the Captain who tutors Stephen in the trenches, and handles both roles marvellously. Iain Mitchell has less to do, playing a local French dignitary and the regiment’s Colonel, but he provides some much needed light relief and should be satisfied that he gives the impression of being wasted in both roles.

It’s the leads that make the evening. Ben Barnes plays Wraysford and Genevieve O’Reilly Isabelle. Their chemistry is fantastic and free of period cliché. O’Reilly manages to show the stifling home life she escapes from without protesting too much and maintain sympathy when her actions seem brutal. Barnes is even better, playing a passionate man without giving any time to nonsense about stiff upper lips and coming across as a true individual we warm to. These fresh performances give the play its necessary emotional punch. They are so powerful that suddenly the birdsong sounds genuine after all.

Written 1 October 2010 for The London Magazine