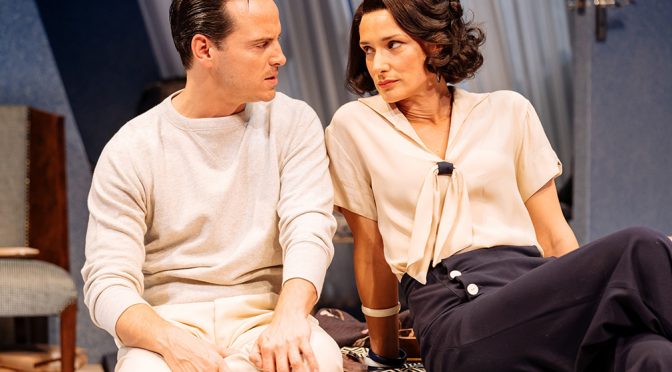 That Andrew Scott’s career is currently at such a well-deserved high adds extra piquancy to his taking the role of actor Garry Essendine in Noël Coward’s play. In a part that’s easily interpreted as the writer’s alter ego, Scott has the star quality to make this study of fame convincing. With such charm and magnetism having everyone run around after him, battling adoration from all and succumbing to temptation time and again, becomes believable and increasingly funny. The joke is on everyone – those chasing and our poor, pursued hero.

Scott doesn’t just get laughs from Coward’s studied script, which is wonderful, but has such command of the stage that every moment is made potentially comic. Showing as much incredulity as élan gives us the oft-cited childishness of the middle-aged man, as well as lot of energy. But Scott has the skill as an actor to make his character’s flaws mean something: for all Essendine’s self-obsession, this is a tender portrayal that appreciates the man’s loneliness.

The production belongs to Scott. Coward made the character – which he performed of course – a mammoth role. Few will complain, in this case. But while the variety of the author’s wit is shown with the various hangers-on around him, the play’s other characters are underdeveloped. The laughs are consistent enough, especially with Sophie Thompson’s performance, but the “adoring and obeying” entourage are mere foils. Only Essendine’s ex-wife can hold her own against him and Indira Varma’s performance benefits as a result: a truly suave figure, her delivery of the world “congealed” is worth attendance alone. Changing the gender for one of Essendine’s lovers – Joanna becomes Joe – barely raises an eyebrow. It’s nice to get the subtext shared by so many of Coward’s plays out of the way and it gives a menace to the role that Enzo Cilenti does well with.

For all the practiced superficiality of the characters and the farce within the plot, the production shows Coward’s depth as a writer. The sweet sorrow that was the text’s original title is given its due – to Scott’s credit – but also through director Matthew Warchus’ sensitivity and intelligence. Each act has a distinct tempo, as a drawing-room comedy becomes sexy before developing a mania that almost becomes grating. Meanwhile, the final act plays with the farce we have just seen before becoming somber. The ending is brave, as the quips that have proved so entertaining alter in tone to become fraught. Essendine’s rants, the overacting we’ve enjoyed so much at, pass into something sad, even dangerous. The play shows itself to be about more than present laughter as Warchus gives it the potential to linger in the mind.