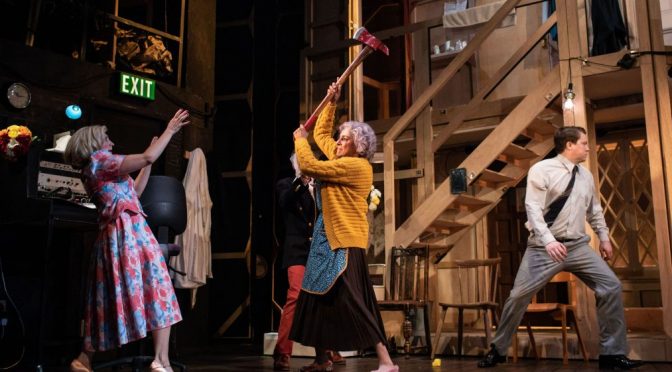 The delicious irony that lies behind Michael Frayn’s classic is as effective as ever in this new revival. Taking us behind the scenes of a farce, from disastrous rehearsals to the exhaustion of a show that’s been on the road too long, actually demands great technical skill. Every deliberately forgotten line or missed cue, each slapstick move and faulty prop needs executing to perfection. Director Jeremy Herrin and his cast have the know-how and, with that in place, the audience can sit back and laugh.

Without diminishing Herrin’s achievement – as well as the coming-and-going of the farce being performed there are the backstage shenanigans going on – Frayn’s play is so perfectly written you can’t fail to get caught up in it. It’s clear from the midnight rehearsal we start at that all is not well. In Act Two, which takes us literally behind the scenes, tensions within the company come to the fore. And by the end of the show those naughty noises we can hear, from the exasperated performers, are nearly drowned out by audience laughter.

If a trick is missed, maybe Lloyd Owen could make it clearer that his character, the exasperated director of the show, is the company lothario. Likewise, the love interests – on stage the actress Brooke (Amy Morgan) and behind the scenes the stage manager Poppy (Lois Chimimba) – could benefit from more laughs from the play’s love triangle. But all the cast are incredibly hard working. For once in the theatre it pays to show the crowd that you are breaking into a sweat, and results are fantastic.

Leading the laughs are Deborah Gillett and Meera Syal as old hands Belinda and Dotty, who are full of endearing gossip. Syal flips from formidable to vulnerable as her elderly character, who has put money into the tour, has to work increasingly hard for a return. There are fantastic turns, too, from Daniel Rigby and Jonathan Cullen as two nice but dim actors who quibble about bags and boxes or questions of motivation. Every ‘love’ or ‘darling’ gets a giggle and, as affection turns into aggression, the play gets funnier and funnier.

Showing the show deteriorate as tensions mount is beautifully done – remember we’re seeing pretty much the same thing three times here! The perspective alters, of course, quite literally when we are behind the scenes, but it’s the creation of a mood by all the cast that does the work. Each scene may be manic but the characters have different paces as exhaustion and desperation sets in. Command of the piece’s tempo means that Herrin gets the final applause. Listening to his onstage counterpart, the advice is to deliver the show with plenty of “bang”. We have that, but the action never escalates into something incomprehensible. As a final accolade for Herrin and his crew, the sense of tenderness towards the theatre in Frayn’s play is clear. The commitment that the show must go on, even if that’s just for the “small crowd at the front of the back stalls”, is unquestioned. Admiration abounds for all involved with a fantastic play that’s brilliantly delivered.