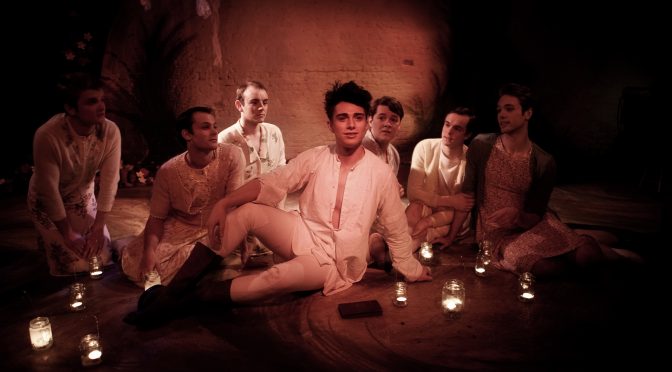 Sasha Regan’s all-male productions of Gilbert and Sullivan’s operettas have become much-anticipated events. And rightly so. Regan’s direction breaths life into G&S in a manner that retains respect for the classics she is dealing with. Patience follows the successful formula: presenting a silly story of love amongst poets, with a milk maid and dragoons thrown in, that does justice to Gilbert’s contemporary satire while providing a knowing eye to what a modern audience might make of it all.

Sullivan’s take on satire was to mock everyone indiscriminately – being uniformly sarcastic somehow makes it seem fairer. The primary target in Patience was the Aesthetic movement, and there are plenty of reference to lilies and the like, but Regan effortlessly broadens the focus to pretentiousness and fashion in general. In so doing, she preserves and expands the show’s humour, ensuring that this is a night full of laughter.

The main character, Bunthorne, a sham aesthete who confesses “my medievalism’s affectation, born of a morbid love of admiration”, is played marvellously by Dominic Brewer, who takes lyrics such as these into his appropriately elongated stride. Followed around by a troupe of smitten maidens, played by an ensemble of uniformly admirable young performers, Bunthorne’s heart belongs to Patience, a young girl confused by the fuss everyone makes about love.

Following topsy-turvy logic, Patience decides the best way to make her love a sacrifice, a key element to its being Aesthetic, is to marry someone she dislikes, so she ignores her true love for the narcissistic Adonis Grosvenor. Edward Charles Bernstone gives an immaculate, intelligent performance in the title role, while the startling Stiofàn O’Doherty is perfectly cast as Grosvenor.

As well as followers of fashion, Sullivan has an eye on the establishment with a troop of dragoons, the residuum of all that is noble in British manhood. There are sterling performances here from both Edward Simpson and Matthew James Willis, who bring out the wit in Drew McOnie’s choreography and whose strong voices highlight another reason why Patience is so good.

This is a musical, after all, and the splendidly subtle musical direction from Richard Bates, with additional input from Michael England, is just as much a star of the show. Accompanying the performance on only a piano and allowing plenty of a capella makes the most of the remarkable voices on offer, ensuring the show is something to be heard as well as seen.

Written 22 February 2012 for The London Magazine