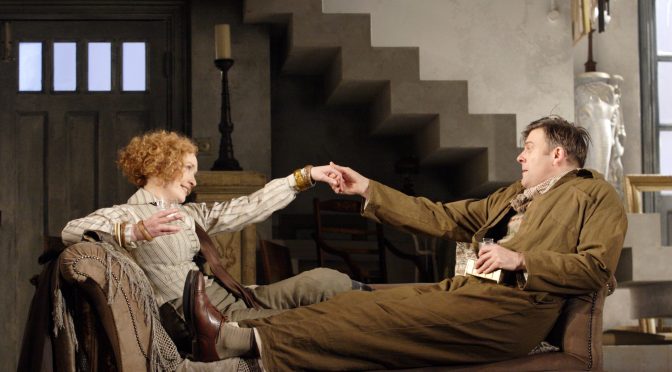 The winter is over and what better way to clear the head than a trip to see Noël Coward’s Hay Fever? Howard Davies’ fabulous new production is spring-like in its appeal; fresh and life affirming, it positively bounces along and is a sure hit.

Coward’s comedy about a bohemian family and their unfortunate weekend guests is one of his finest and liveliest works. The Bliss family are wonderful characters, dripping with 1920s glamour. In keeping with their ecstatic nomenclature, the Blisses are out of this world – inhabiting an altogether more theatrical sphere.

Lindsay Duncan is perfect as the matriarch Judith. Not that one would dare use that term in front of her. Sexily voiced and revelling in her “celebrated actress glamour,” she casts everyone in a play of her own making – whether they like it or not. Drama follows her like an expensive scent, with hilarious results. And not good drama either – it takes talent to act this badly. Duncan delights as she hams it up creating ‘scenes’ that include her baffled visitors.

Hay Fever has a strong supporting cast, including rising star Freddie Fox, whose cheek bones alone make him perfect for period drama, and Jeremy Northam, who gives a charmingly understated performance. Two more members of this talented ensemble must be highlighted. Phoebe Waller-Bridge plays Judith’s daughter, getting a laugh out of every line, and Olivia Coleman is Myra – the only guest to challenge the Bliss phenomenon. Far more at home in London, Myra cattily accuses Judith of “rusticating” in the country. It’s a glorious put-down, delivered sublimely in a play full of clever insults, which is sort of ironic, since nothing but praise should be written about this play or this production.

Written 27 February 2012 for The London Magazine