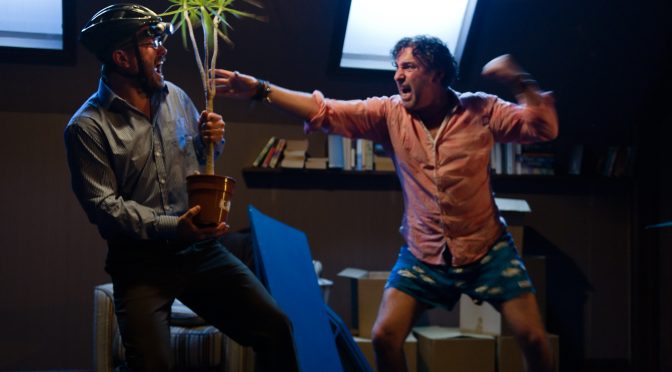 There’s a lot of common sense in Kefi Chadwick’s play The Mathematics of the Heart, now running at Theatre 503 in Battersea. Paul, a middle-aged maths professor, loves order and seeks to predict what will happen. Chadwick reminds us that the world isn’t like that.

Disrupted by his father’s death and the arrival of an odd bequest – a pre-packed sailing boat – Paul’s relationships with his new student, his errant brother and his long suffering fiancée come adrift. Fortunately, Chadwick and the cast are thoroughly in control.

Bella Heesom is arresting as the young student and Isabel Pollen gives a stunning performance as the fiancée constantly in waiting. Pollen’s character is a cold fish, which makes her well-observed and emotional performance all the more remarkable.

But the heart of the play is a fascinating sibling relationship. Mark Healy is terrific in the lead and Mark Cameron is given a superb role as his brother Chancer. The ego-driven, self-appointed moniker is indicative of this obnoxious but funny, free spirit (there’s a touch of Gloria Swanson about him – the many rock groups he has joined haven’t sacked him, “I always leave first!”). Chancer and Paul are diametrically opposed, artfully described as double pendulums: starting out together but now swinging at different velocities and, frighteningly for Paul, at unpredictable speeds.

Chadwick doesn’t plumb the depths of a connection between maths and art – for academic simply read emotionally dysfunctional. Director Donnacadh O’Briain provides a nice take on the mechanics of theatre, though, with the cast making open demands on the sound and lighting and some very sweet audience participation. It is a shame that O’Briain allows Theatre 503’s intimacy to become a problem, with far too much action occurring in the aisle. Take care to sit at the back and away from the steps as it would be a pity to miss anything about this well crafted, accessible and appealingly modest play.

Written 10 February 2012 for The London Magazine