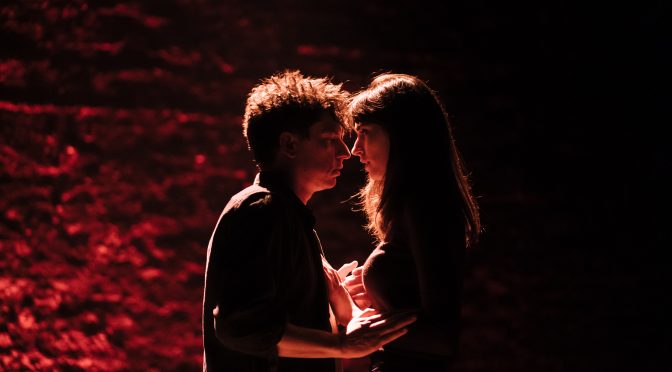 There is nothing easy about Cordelia Lynn’s new play. Given that it looks at anti-Semitism, and the legacy of violence through the prism of a troubled relationship, the fact that it’s difficult to watch isn’t surprising. The shock is that the play lacks power.

Setting up connections between a historic pogrom and its effects on a single couple living much later is an intriguing idea – the kind of question theatre should be addressing. Good intentions and topicality aside, the subject isn’t well handled.

Being deliberately vague makes the piece too hard to follow. That it’s set in a generic near-future, in a Fascist Poland, takes a while to work out. I’m sure there is some point to being so generic, but too little context makes the action and connections opaque and frustrating. And we are robbed of preparation for the play’s final scene, set in a past that hasn’t been addressed adequately.

There are problems with the love affair too – lacking chemistry, it’s hard to believe in it. A political poet (named, sigh, ‘Him’) is energetic and superficially appealing. ‘Her’ is a scientist who has to come around to his enlightened thinking as her life is impacted by populist politics. But the characters are uneven: she far more interesting, imaginative and full of surprises. Snippets of poetic internal dialogue strive achingly hard to be profound but add little.

The series of short scenes, dropping the audience into dramatic situations, are sometimes funny and often bold. And the acting is good. Tom Mothersdale and Abigail Weinstock give committed performances, the latter being notable as a professional debut of great confidence. But Lynn’s skill as a provocateur ends up wasted with vague arguments that aren’t as original as the theatricality of the production.

For the show is strong visually. Credit to director Elayce Ismail and an excellent technical team. The lighting design by Joshua Pharo is innovative, especially when it comes to disturbing scenes of violence. And Basia Bińkowska’s set, with a surprise for the finale, is superb. That last scene takes us to 1918 and Lemberg but I’m not sure I’d have worked that out without a programme.

Lynn isn’t obliged to write for a simple soul like me. Pointers to the past might be enough for some, and it’s clever to have a play that looks to the near future flip into the past for its conclusion. There is a charge as Mothersdale arrives in the character of a soldier to confront Weinstock in the role of her grandmother. But I wasn’t interested enough in a future already seen to bother as much as I should. The subsequent bleak union, thankfully separated from most realities, is too divorced from dramatic interest.