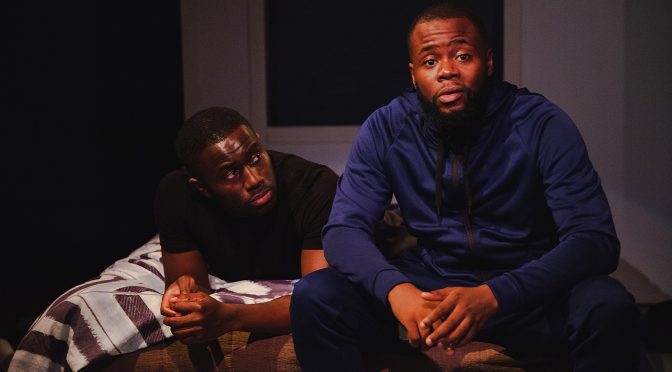 Dexter Flanders’ carefully modest play is an impressive character-driven family drama. Shortlisted for the Alfred Fagon Award, Foxes is a winning piece that is easy to recommend.

Daniel’s church-going family opens its home and heart to his pregnant girlfriend Meera when she is rejected by her Muslim parents. But the family is torn apart when Daniel comes out as gay. It’s the play’s next move that really surprises.

The plot is part of Flanders’ skill and strategy to question the nature of acceptance – and what we compromise on to gain it. Presenting complex, contradictory emotions makes this debut play mature.

It seems a shame to define the strong characters in Foxes in relation to David – they are all so good. Arch yet adorable Meera and her sister-in-law Deena are brilliantly elaborated by director James Hillier and performers July Namir and Tosin Alabi. They don’t just present arguments, but are recognisable people that you care for.

Both young women light up the stage. As a stark contrast, Anyebe Godwin, playing the man in Daniel’s life, does a brilliant job of showing the dark toll that living in the closet has taken on a bright young man. His clandestine existence gives the play its title.

What I suspect is the origin of the play – Daniel’s coming out scene – is another highlight. The scene is stunning. Not least for Doreene Blackstock, who plays Daniel’s mother with such ferocity and tenderness.

So, Flanders can write characters. The off-stage father who all mourn is further proof – he is a tangible presence. But it’s the central role, played by Michael Fatogun, who really grabs the attention. Confusion isn’t easy to show on stage, but Fatogun manages to convey the trauma and elation of his first gay kiss brilliantly. Throughout, Daniel’s youthful bravado and sensitive intelligence are made clear. It’s a performance, and a role, to dream about.

Breaking up Flanders’ short scenes might be handled better by Hillier, as Foxes is slightly longer than needed. The production’s projections are impressive but feel unnecessary. And I’d welcome a stronger sense of place than Flanders provides. But these are minor quibbles against a strong show.

Chances for Daniel to change, through several scenes in Act Three, build momentum nicely. A series of potential conclusions impress – and depress – by turn. How will Daniel and his family solve their dilemma? Dexter appreciates that any happy ending is going to be messy. How many lies will each character put up with? One certain truth is that everyone should see this play