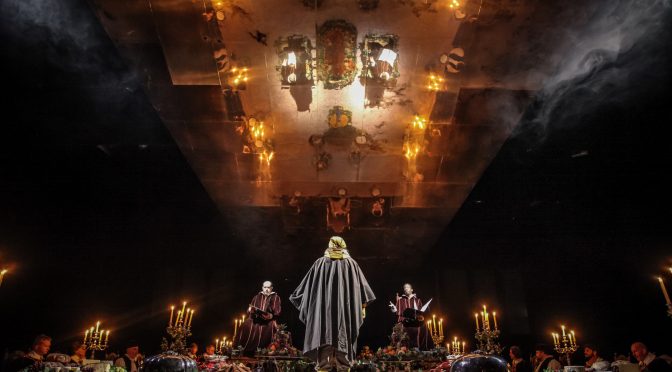 History buffs look out; Caryl Churchill’s English Civil War play is a different kind of story about past times, concerning common people and heavyweight ideas, rather than Great Men.

Lynsey Turner’s punchy direction has design supremo Es Devlin’s work as a backdrop, moving from sumptuous to stark. A community company of local residents, whose participation fits the spirit of the play, mean this an enormous cast. Turbulent history, with “men in a mist”, is evoked by scale.

Trystan Gravelle and Nicholas Gleaves’s stand out, as two soldiers in Cromwell’s army, with increasingly divergent ideals, forming one of few traditional story arcs. Ashley McGuire and Amanda Lawrence impress by giving their roles an immediate power. Many of  the short scenes most of the play is made up of are strong but the culminating effect is underwhelming.
With politicians all around at the moment, do we need to hear canvassing from the seventeenth century? Levellers with manifestos, proto-Communist Diggers in, of all places, Weybridge and Ranters, reinforcing the period’s religious fanaticism. The ideas are radical at least. And Churchill makes these thoughts from the past live…for the most part.

When her exegesis falls it’s disastrous. A scene on the Putney Debate, where soldiers argued with Cromwell, is so boring it’s likely to be the most memorable thing about this, overall, commendable work.