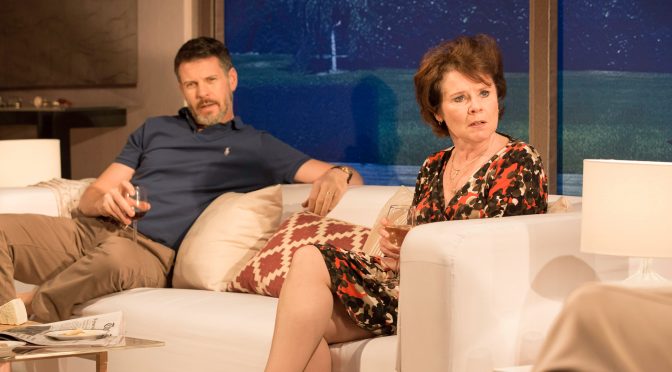 Impeccably directed by Jonathan Kent, with a superb set from Hildegard Bechtler, the play is about a working-class woman in South Boston. A story of the recent financial recession, and good old-fashioned class strife, it’s full of intelligent belly laughs.

I can’t imagine Imelda Staunton took long to say yes to the role of Margaret, who is with us in every scene. A great actress at the top of her game, Staunton slips seamlessly into this is fascinating and fantastic character. Recently laid off work, with a disabled daughter to support, Margaret is sharp as a knife and deeply human, endearing us to her with her enduring hope and her disbelief about how the other half lives.

The return to Boston of an ex-boyfriend – who is quite literally the one that got away – gives rise to two fantastic scenes of comedy and confrontation. As a ‘Southie’ from the same depressed background as Margaret, now made good as a doctor, Lloyd Owen provides a suitable spar to Staunton’s talents as the now successful man taunted for being “lace-curtain Irish”. And there’s a lovely performance from Angel Coulby as his wife. The tension and the comedy mount wonderfully as Lindsay-Abaire throws race, gender and questions of inequality into the mix.

The play is too fleeting, indeed fast-paced, to give any big theme its real dues; but if it’s thoughts you want provoking this is dynamite stuff for debate. The banter is brave and biting, while Margaret’s true desperation and the fact we continue to hope she really is one of those ‘good people’ give it heart as well as humour. The story is resolved in a courageously short epilogue held in a bingo hall, which shows what a fine plotter Lindsay-Abaire is. The play certainly deserves a full house.

Written 6 March 2014 for The London Magazine