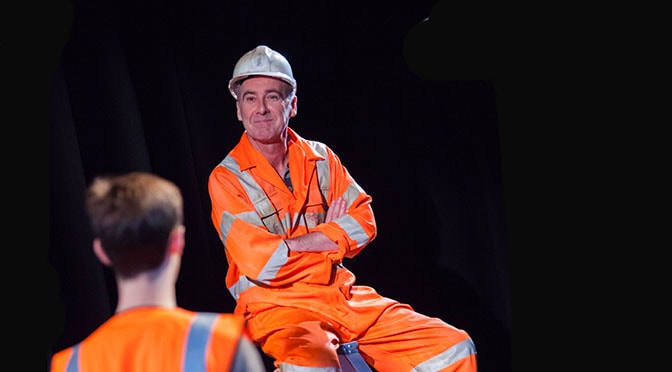 Al Smith’s play, inspired by Nikolai Gogol’s short story, is a triumphant commission from the Gate, already praised for its premiere at the Traverse Theatre in Edinburgh. Using schizophrenia to touch on plenty of issues, the play’s often very funny humour turns on a knife (well, a screwdriver) to create something truly gripping. Christopher Haydon’s direction is swift and sure, while a strong cast is clearly determined to make the most of this bracing piece.

Smith’s updating of the story is a neat affair. Set at the Forth Bridge, our hero, Pop Sheeran, is the latest in a family tasked with continually repainting the national monument, now owned by a global corporation. Times are changing. Liam Brennan takes the lead, giving a well-paced performance as an appealing figure with a  movingly delusional mental illness.

Talk of identity, national and professional, is instigated by the arrival of a young Englishman (Guy Clark does a super job here), which might feel contrived and portentous but isn’t. Modern life and sexual politics are quickly addressed, yet there’s real insight. If there are routes that could be explored further, credit to Smith for staying so evenly on track.

Firmly rooting the play in a community works wonders. This is a family drama as well. Deborah Arnott contributes immeasurably to a convincing portrait of marriage as Pop’s wife. Louise McMenemy brings depth to her role as their daughter. A neighbour and friend, a part to which Lois Chimimba brings hugely confident comic timing, gives us two young girls growing up – their sassy dialogue is a delight.

Laughter and insanity isn’t a new combination. Smith highlights discomfort about the connection but, more, utilises the humour impressively. A puppet of Greyfriars Bobby rewrites a tourist legend in a creepily memorable comedy scene. And, at the risk of too many spoilers, the finale at a fancy dress party themed on Scottish heroes is a damn clever move. The path towards Pop’s breakdown is so skilfully written, it’s as pleasurable as it is painful to watch.