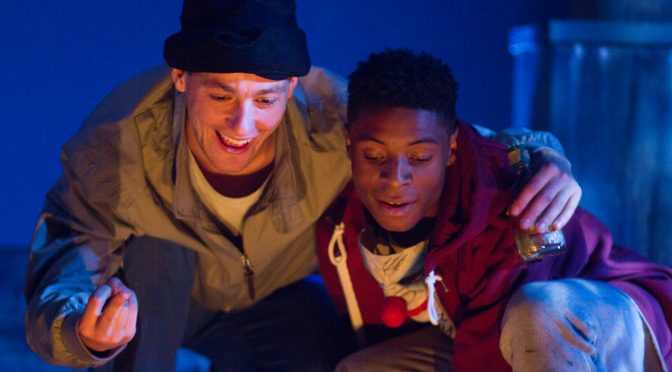 London’s fringe theatres have a commendable number of plays that appeal to a gay audience. But, let’s be honest, too many have a historical focus, while gratuitous nudity often compensates for a lack of imagination. At the risk of offending playwright John O’Donovan who may not welcome any such comparison – this piece is well written by any standard – the unusual gay romance his accomplished debut work explores is a more sophisticated affair with a strong, contemporary feel.

The action takes place on a roof, impressively rendered by designer Georgia de Grey, onto which two young men make a bungled escape after a drug-fuelled burglary. These aren’t your stock gay characters. Free of angst about sexuality, the story is about all the other things in their lives. O’Donovan skilfully reveals the extent of their troubles as working-class lads living in a small town in County Clare, while showing how profound their affection for one another really is.

Mikey is a fighter, maybe just a common thug, struggling to show emotion behind bravado. Alan Mahon brings out the roles charisma, delivers the jokes well and shows the writing’s subtlety. The object of Mikey’s affection is Casey, not quite the victim he first appears (there’s a lovely twist here), and a role that Ammar Duffus develops beautifully. Both actors make the offstage families that O’Donovan describes vivid – a sure sign of strong writing – and the chemistry between them, as they struggle to establish a partly covert relationship, is terrific.

The couple’s musings on life are frank, funny and, considering how much cocaine they snort, wise. There’s a strong dose of realism, well balanced by director Thomas Martin, and tension too, as the police circle the roof, Casey makes plans to fly away from his problems and Mikey has to come down to earth and face his future. It’s the tight dialogue around the potential and problems of escaping provincial life that ring true. This cleverly modest play will speak to a wider audience than you might suspect.