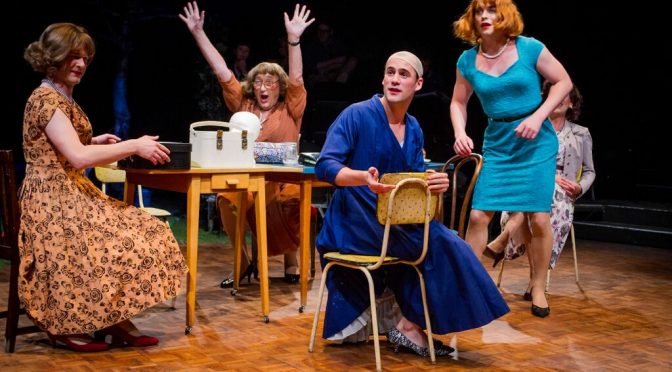 From the true story of a holiday retreat for transvestites at the turn of the 1960s, Harvey Fierstein creates an intriguing and substantial comedy drama that has plenty of balls.

Peopled by brilliant characters, most of whom I’d happily see a play about, director Luke Sheppard’s European premiere revels in these complex roles. There’s a decorated war hero, known as Bessie, performed with great charm by Matt Rixon. Ashley Robinson gives the independent Gloria (“irresistible” as man and woman) an appropriately arresting rendition. And new to this tight-knit crowd comes Jonathan, literally allowing his alter ego Miranda out for the first time, with a sensitive portrayal by Ben Deery.

This is all moving and interesting. But there’s another story, too, as the community searches for respectability. Driven by the serpentine Charlotte (played mesmerisingly by Gareth Snook), there’s a drive to dissociate transvestites from homosexuals. Charlotte is a zealot and her combat with a closeted judge, played by Robert Morgan, includes a riveting blackmail scene. Fierstein shows us not just the camaraderie of this community, but also how persecution blights lives.

In the middle are the resorts owners, a married couple (or should that be trio?): George/Valentina and Rita. Edward Wolstenholme takes the title role, trying to make a business work and craving “normality” (he’s in the wrong place in more than once sense), while his understanding wife, the heroine of the piece, is given a strong presence by Tamsin Carroll. Their union collapses under the pressure of his competing personas.

Fierstein doesn’t blindly follow a liberal agenda. Clearly, revealing how difficult these men’s lives are creates sympathy. But the secrecy surrounding cross-dressing takes its toll on them and nobody here is a saint. Of course, the play is all the better for this. A work of deep insight, benefiting from the scrupulous mining of a time and place, Casa Valentina delves into psychology with flair and bravery.