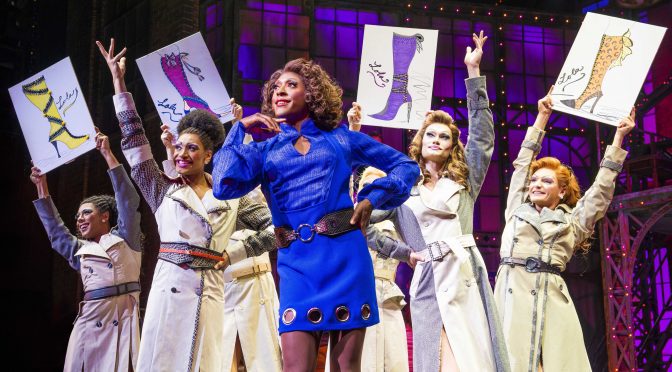 Here’s another musical based on a movie, this time the hit Broadway adaptation of a sweet true story about a Midlands shoe manufacturer saved from bankruptcy by making boots for transvestites. It’s a model musical with basic morals, a focused plot and nicely developing characters you care about. And, judging by the audience’s rapturous response, it looks as if it will kick up its heels and run and run. Given the footwear worn by the cast, that’s no mean achievement.

Kinky Boots is more a collection of songs than true musical theatre… but it is an excellent collection. Putting aside the opening couple of numbers, there’s variety, originality and an exceptionally high hit rate. The production has some issues with delivery from the chorus, making lyrics hard to hear. But these songs feel like old friends, such is their instant appeal – it’s like a jukebox musical without the back catalogue. It’s still fairly hard to believe that Cyndi Lauper’s score won the Tony over Tim Minchin’s Matilda in 2013, but that’s awards for you.

Killian Donnelly plays Charlie Price, who has just inherited the family business, and is top-notch with a tremendous solo number, ‘Soul of a Man’. There’s a standout turn from Amy Lennox as his love interest, whose quirky delivery of ‘The History Of Wrong Guys’ is a real crowd pleaser. In the lead role of Lola, the drag queen turned shoe designer, Matt Henry sounds superb but his comic skills need honing and, ironically, he doesn’t seem that comfortable in drag… yet. Another problem is that the ensemble feels split, with the shoemakers trying too hard to compete with Lola’s superb troop of backing singers. Since these ‘Angels’ include performers who can do a back somersault in heels, those in the factory lose out a little too obviously.

Backing up the show is Harvey Fierstein’s book and impeccable direction, including choreography, from Jerry Mitchell. It’s an understatement to say they know what they’re doing. Both Broadway legends, their work is almost ruthlessly efficient. Fierstein can write a put down better than most (Lola wouldn’t trust herself to “babysit a cactus”) but the focus is Lauper’s feelgood soundtrack, which elicits near hysterical responses from people around me. I wouldn’t go quite that far, but it’s definitely fun, and Kinky Boots can hold its head tall. And, in those heels, that’s very tall indeed.