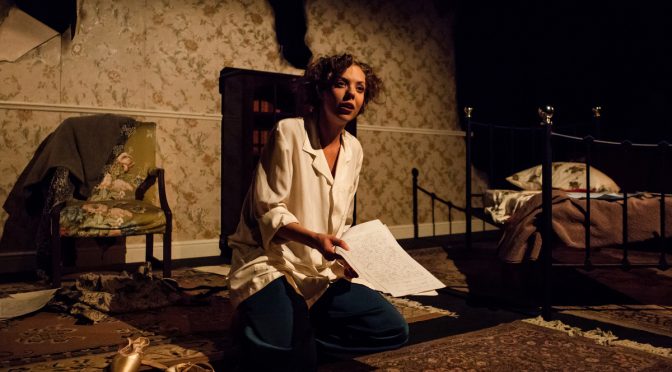 Critics have pointed out that this is the year of The Great Gatsby. With several stage versions, and Baz Luhrmann’s film in production, the author F.Scott Fitzgerald is much discussed. So it’s good to see another side to the story – that of his wife Zelda – in Kelly Burke’s powerful one-woman show. It’s a fascinating tale that succeeds in establishing its subject as a personality in her own right.

Burke is a captivating presence. Having written the show using texts by Zelda herself, she’s close to her subject. She makes Zelda both fun (it’s easy to see how she captivated the social scene of her day) and tragic, finding herself “thoroughly broken” after the Fitzgeralds make a Faustian pack with psychologists that has her imprisoned in a mental hospital, fighting for her creativity and only allowed to write, with a pencil, for an hour a day.

But, as with Nick in The Great Gatsby, Zelda isn’t a narrator we can trust. The creative symbiosis between her and Scott is exaggerated and this leads to tense drama. Burke’s intelligent performance makes Zelda beguiling – positioned on the edge of sanity with admirable restraint. The end arrives with a painful enforcement of the costly price Zelda paid for her life with the great man Fitzgerald. This is a carefully layered piece, superbly performed, that will stay with you far longer than its hour-long duration.

Written 20 September 2012 for The London Magazine