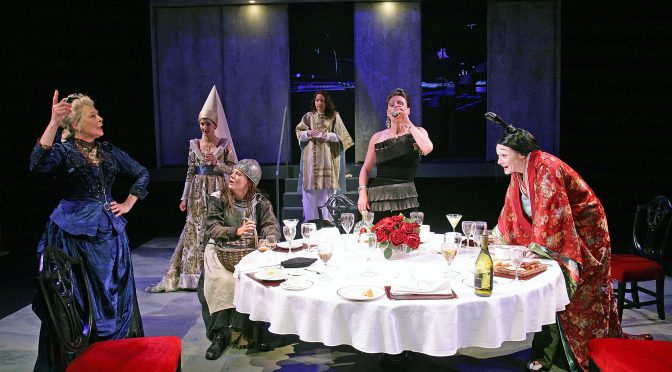 What an opening: given its first act, it’s no wonder Caryl Churchill’s Top Girls has such a great reputation. A riotous dinner party unites women from myth, history and fiction in an Absurdist tableau to discuss their lives, loves and deaths. The stuff of doctoral thesis is seldom this funny – witness the Victorian explorer’s racist faux pas towards the medieval Japanese noblewoman – but what makes the scene so riveting is Churchill’s ability to bring the pain these women experienced so close to the surface.

How this connects to the rest of Top Girls is another chapter in that thesis. The play becomes the story of the party’s host Marlene. An 80s career women with a recruitment agency, the role is performed superbly by Suranne Jones. Wonderfully attired and every inch the thrusting executive, Joseph Epstein could have had her in mind when he coined the phrase ‘yuppie’.

Marlene’s is a cruel world. One of her clients, in a stand-out performance from Lucy Briers (who has a great night, also playing Pope Joan), is a bitter middle manager of 47, who’s told that her age is a “disabling handicap”. And Marlene’s back story, escaping to the city, has enough drama when she returns to Ipswich to match The Homecoming.

Max Stafford-Clark’s assured direction does a lot of favours to Churchill’s text. He has the experience, having directed the premiere in 1982 at the Royal Court, and this new production arrives from Chichester with rave reviews.

Marlene’s casual rejection of her daughter Angie, played cogently by Olivia Poulet, is devastating – she’s no “top girl”. The family confrontation that centres on Angie’s future is electric, with a passionate performance from Stella Gonet, the character who gets to ask what will happen if the young girl just can’t “make it”.

Top Girls is political to its core. Marlene’s pin-up girl is Mrs Thatcher – she’d give her the job – and Churchill’s particular politics of fear, debatably, makes the play feel dated. But the strength of this revival is to show the nuances within this landmark play. The complexity of the characters indicates that there are still questions to ask – Churchill’s provocative presentation demands they are answered.

Written 17 August 2011 for The London Magazine