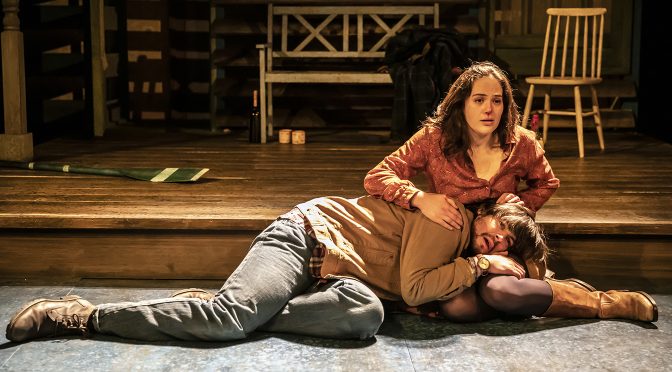 David Mamet’s 1977 play is a romantic drama – just a very fancy one. The script is clever and, in this revival, carefully managed by director Russell Bolam. Allusions are dense, the angst extreme and the sexual politics wretched. If you aren’t a Mamet fan, it can prove tiresome. There’s an easy misanthropy behind the story of a couple falling out of love in a romantic cabin, even if the ideas spouted are highbrow. Is it obvious I’m not sold?

But I’d still recommend this show unreservedly – because the two performances here are fantastic.

Watching Sam Frenchum as Nicholas and Francesca Carpanini as Ruth isn’t pleasant. As a gushing hippy away from the city, she is frankly annoying. Nor does her mistaken idea that ursine partner is “serene” generate much sympathy. Meanwhile, Nicholas’ mansplaining isn’t going to win him many admirers.

The anxiety both characters share is carefully revealed, especially by Frenchum, while Carpanini triumphs in showing Ruth’s desperation. And this is all despite Mamet’s exaggerations… let’s just say that the idea of alienation has a witty twist.

Nobody could make light work of the dark atmosphere Mamet insists on, or the secrets toyed with so effortfully. Nonetheless, these actors – and Bolam – understand the play’s undeniable dynamism. Watching the characters develop and respond to events and revelations is the highlight. Both actors bring intensity to their roles at just the right moments. From who you find more annoying to when you start to get scared, it’s all effective drama and very well performed.

Frencham manages to make the existential speculation here feel as natural as it can, and Carpanini proves an effective foil (it isn’t her fault that her character is only a point of contrast). If The Woods doesn’t move you emotionally, it will still make you think.

A final point of praise seems appropriate and serves as a bit of a spoiler. There is violence in the play and this is brought to the stage with such skill that it should come with a warning (I thought something had gone horribly wrong at one point). It’s overall technically brilliant, undoubtedly impressive, but somehow remains cold.