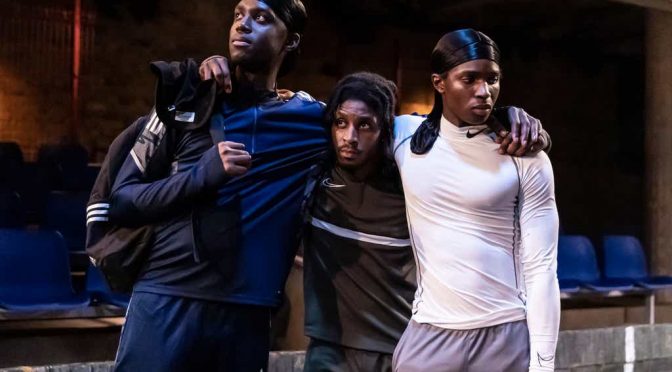 This assured debut by Tyrell Williams makes playwriting look easy. A carefully modest story of young friendship, Red Pitch is funny, sweet and has something important to say about life in London.

The three 16-year-olds we watch practising football is surely a challenge to negative stereotypes about young black men. You can’t review what a play isn’t but, suffice to say, they are an admirable trio: smart, supportive of one another and dedicated. Getting to know them is a pleasure. And Williams’ comedy writing is joyfully solid.

It helps that the roles are wonderfully performed. Under Daniel Bailey’s exuberant direction, Kedar Williams-Stirling, Emeka Sesay and Francis Lovehall bring the characters to life – comfortably so. The confidence isn’t surprising – all three performers are bright young things – but it’s also appropriate given the sense of camaraderie between them. The banter is recognisable as common among young men. The affection, less so – and this is what impresses most.

These lives are not easy. But nor are they a grim, defeated struggle. Omz is a primary carer, despite his age, which leads to moving moments for Lovehall. Bilal is under pressure to become a professional football player – a plot allowed to emerge with skilful subtlety. The pace of the whole play is commendable, Sesay’s strong depiction of Joey, who matures most as we watch, is indicative of how firmly structured the writing is.

There is a further pressure on these youngsters – one they have no control over. The redevelopment of their estate is a backdrop to the action (carefully evoked by Khalil Madovi’s sound design). As their families relocate, and their community is about to change, there are moments of touching naivety to remind us that our heroes aren’t as old as they pretend to be.

Tensions erupt, and the play threatens to end on a sour note. Separation will occur, and not just because of relocation – these childhoods are about to end. But, as an indication of how involving Red Pitch is, I’m glad Williams suggests friendship will endure, that the bonds shared and enjoyed by the audience aren’t so easily broken.