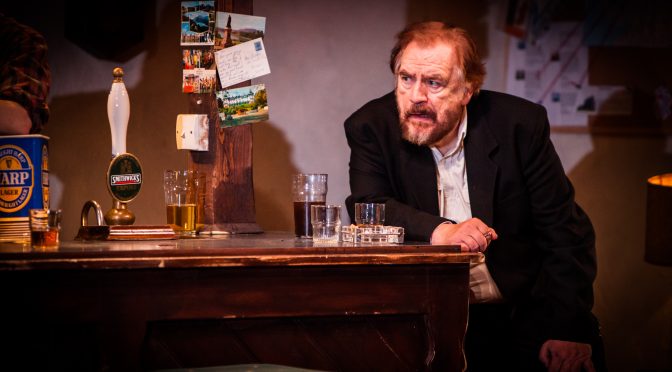 With queues for Josie Rourke’s Coriolanus starting crazily early, adding to her string of hits as artistic director of the Donmar Warehouse, she now has a West End transfer to boast about with The Weir, which opened at Wyndham’s Theatre last night.

This much admired and awarded play dates from 1997 and sees various ghost stories told by its misfit characters in a small rural pub. Fortifying this tried and tested concept are Conor McPherson’s beautiful writing and mythic undertones: suggesting our longstanding psychological connections to storytelling and the supernatural.

Rourke’s production is spookily precise. Like one of the play’s characters, Finbar, she clearly has “an eye for the gap” – pauses are perfectly measured for both comedy and tragedy and space is created for the captivating stories. The pace is wonderfully controlled, and the banter in between, the majority of which is very funny indeed, fills out the characters, adding further layers to the play.

Each of the roles is interesting and exceptionally well acted. Risteárd Cooper and Peter McDonald give fine performances as a local entrepreneur and the landlord of the pub. Their different ambitions are just one example of a cleverly injected sense of community, covering the petty differences of life in the country and a network of personal histories. Crowd-pleasing Ardal O’Hanlon joins them as Jim, a bashful handyman who still lives with his mother.

Upsetting the group’s equilibrium is Valerie, a new arrival or “blow in”, who soaks up local folklore then reveals her own ghost story. In the role, Dervla Kirwan delivers the most moving moment of the evening, bringing home the pain and loneliness all feel and fight against. But it’s Brian Cox – as the finest storyteller and bar room wit – that you can’t take your eyes off. Playing an ordinary man with a quiet sadness slowly revealed with great skill, Cox heads a high-powered cast that’s sure to really pack them in. And deservedly so.

Written 22 January 2014 for The London Magazine