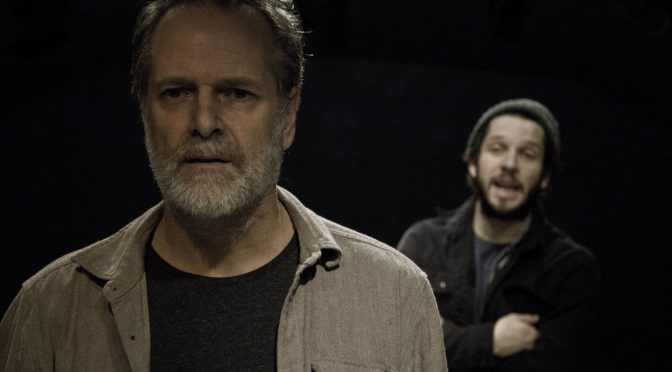 The Body of an American, which opened last night at the Gate Theatre, is an intriguing docudrama. Written by Dan O’Brien, it explores his friendship with the war reporter and photographer Paul Watson. Focusing on Watson’s Pulitzer Prize-winning photograph of a butchered American soldier in Mogadishu in 1993, O’Brien’s questioning of the older man’s motivation is matched by an examination of his own life and work.

The play and production are ingenious. William Gaminara and Damien Molony perform as Paul and Dan, but they also share each other’s lines (this works better than it sounds), as well as taking on a host of minor roles. Performed in traverse, photographs by both men are projected and create a companion dialogue.

While impeccably directly by the talented James Dacre, the piece comes perilously close to being overwhelming. What makes it so absorbing is that it seems such a collaboration between writer and subject. The latter’s memoir is credited as an inspiration and his voice is rendered so convincingly by O’Brien that he almost becomes dominant. But it’s really two stories. O’Brien reveals much of himself: like his friend he is haunted by events, and he skilfully creates an uneasy question as to the reliability of his ‘reporting’.

The terrifying events and atrocities that make up Watson’s work naturally make better drama. The fact that the stakes are so different are always acknowledged – think Hemingway meets Henry James – but the imbalance between the jobs leaves you questioning your own position. O’Brien’s struggle to make sense of Watson’s life, and make a play about it, creates a link with us all. His blend of passion and perspicacity makes this an unusual play that’s well worth watching.

Written 21 January 2014 for The London Magazine