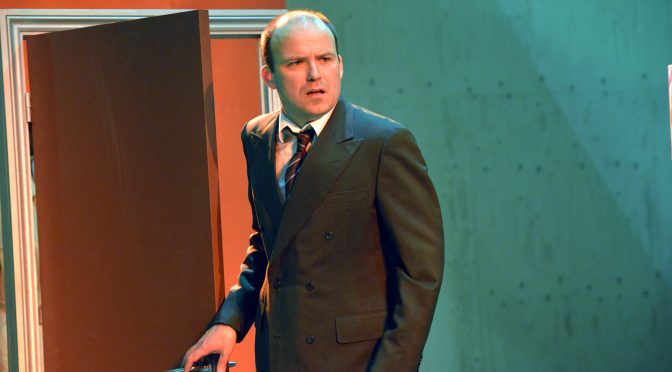 Nick Gill’s adaptation of Kafka’s novel makes for a puzzling piece of theatre. Cold, confusing and frustrating (I’ll get back to that last point), it has the feel of an endurance race, not least because the action takes place on a conveyer belt, built into Miriam Buether’s eye-wateringly orange set. There’s a lot of distance covered by the famous Josef K: arrested and fighting a faceless system to discover the nature of his crime, he is forced into a painful self-examination that drives him mad. There are so many themes here, from bureaucracy, lots of yellow paper, to role of the artist (cue dance music), that the show becomes so relentless it becomes monotonous.

The cast under Richard Jones’ direction win your admiration. Hugh Skinner adds a modern sleekness to the role of Josef’s work colleague – you can picture him in the City, despite the costume. And Sian Thomas is superb as Josef’s fast-talking lawyer. Taking on six parts as the women in Josef’s life, from a lap dancer to his next-door neighbour, keeps Kate O’Flynn busy. But Rory Kinnear in the lead role gets the gong for sheer hard work. On stage for near two hours, in a gut-wrenching performance that connects strongly with the audience, he is remarkable.

Kinnear also has to deal with an unusually difficult script. Josef’s internal dialogue is presented in a novel, poetic form that, perhaps because of the set’s colour, is reminiscent of Anthony Burgess’ A Clockwork Orange. Take the first line – “An almost woke ee up one morn” – and you get the idea. The execution is visceral, the technique arresting. Josef’s sexual frustration and anxiety are captured (the connection between lust and legal problems is one of Gill’s more intriguing insights), and his articulacy seems to deliberately deteriorate as the play goes on. The dialogue certainly becomes more difficult to follow, which increasingly jars – so much so that the play’s end comes as a relief for regrettably prosaic reasons.