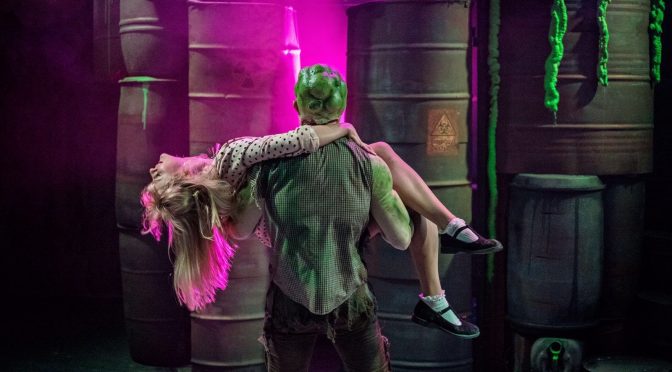 B-movie inspired musicals are an established genre, from Rocky Horror shows and Little Shops to recent examples such as Bat Boy at this very venue. Joe DiPietro and David Bryan’s 2008 work, based on Lloyd Kaufman’s film, shares the schlocky kitsch appeal and knowing references that fans love. And there’s a super cynical side that suits contemporary musicals, with a take on government and environmental issues – Urinetown springs to mind – ensuring wide comedy appeal.

There’s a superhero angle that provides laughs, as the town nerd gains great powers (applause for nifty costume changes throughout) and sets about tackling pollution in the town of Tromaville, New Jersey. Battling corruption and prejudice with a love interest thrown in, there’s plenty to parody, and The Toxic Avenger does parody very well indeed.

The script is a good deal stronger than the score, which lacks direction and possesses conviction only when it comes to comedy. But the lyrics are frequently inspired – geranium rhymes with cranium, for example – and the jokes are good. And the pace is impressive; this show is literally a laugh a minute.

The cast is accomplished and creates an infectious sense of fun. Mark Anderson takes the lead, deserving acclaim, with a superb voice. Hannah Grover is the blind librarian Sarah, uninterested in a romance until Toxie’s transformation; her comic skills make the most of jokes about disability and sexiness (a little too obvious a ploy to make this an ‘adult’ affair). Lizzii Hills impresses even more, playing both mother and town mayor, scoring a big hit in a number that is a duet between the two. The power behind all three voices skates over some bland musical moments.

The stars of the show are Marc Pickering and Ashley Samuels, who play all the other roles – doctors, scientists, policemen, thugs and Sarah’s girlfriends (condragulations (sic) on that one). Running around like mad, Pickering and Samuels’ standard of singing never drops, the folksy title number is delivered brilliantly, their interaction with the audience great and, under Benji Sperring’s strict direction, each gag itself is never overplayed.

However, the major drive in The Toxic Avenger is in the dismantling the conventions of musicals themselves and this does become repetitious. There’s a Les Mis reference and a Phantom gag. Everyone loves a show with in-jokes (think Forbidden Broadway) and Sperring ensures the humour feel fresh, spontaneous even. But it’s a shame The Toxic Avenger doesn’t go that little bit further. There’s a suggestion it might, with a darker turn of events. Instead, we fall back on the fact it has a small cast and one joke that builds superbly. But it fails to surprise.