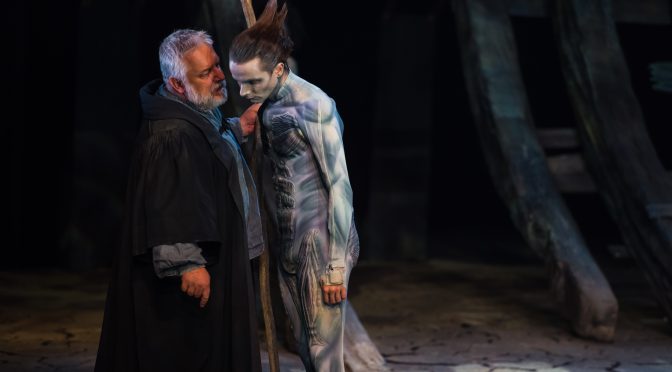 If you ever needed a reason to forgive computer company Intel for its annoyingly catchy ad jingle then its collaboration with the RSC is it. A large team, working with designer Stephen Brimson Lewis, has added ground- breaking effects to Gregory Doran’s production of Shakespeare’s late romance, and the result is a big theatrical event.
It’s a good choice of play to unleash the clever technical trickery on. From the shipwreck that sends Prospero’s enemies into his territory, the island becomes awash with projections. And spirits really do melt into air in the case of Ariel, played by Mark Quartley, as a live motion capture suit is employed on stage for the first time. The resulting imagery is appropriate and surely becomes more and more impressive if you understand how difficult it all is. Even so, the designers might be a tad aggrieved to know that all eyes are really on the live actor. Quartley gives a sensitive performance of remarkable physicality that doesn’t really need assistance.

The tech goes to town with the masque that Prospero conjures, its design based on Ben Jonson and Inigo Jones’ work, so that part of the play that can drag looks great. But again, beyond the spectacle, it’s the basics of the show that really work. A large cast of spirits add immeasurably and this is truly an island “full of noises” with a strong score composed by Paul Englishby that combines a variety of genres.
There’s a glitch in the application, too. The autochthonous Caliban could be the key to the island but he isn’t granted any modern magic. This rationale makes sense but it makes the character out of place, with no link to his inheritance – surely a missed opportunity? It’s a game performance from Joe Dixon, but the monster costume, the only foot Brimson Lewis puts wrong, suggests the aim is to get some laughs – what else can an actor do if he gets given a fish as a prop?

The key ingredient isn’t the intel inside but Simon Russell Beale’s performance as Prospero. Directed as a family drama, the relationship with Jenny Rainsford’s Miranda – an excellent performance – is deeply moving. Similarly, as his treacherous brother, Jonathan Broadbent makes a role often forgotten memorable. A complex relationship with Ariel, suggesting a substitute son, is also explored.

Russell Beale can be magisterial with ease but focuses on Prospero’s neurotic moments. The all-powerful magus sees his plan on a knife-edge, adding excitement to the production. This Prospero has many a mini breakdown, as the tension of plotting gets the better of him – at one point he even screams, and the prospect of changing overwhelms him. Doran was clearly sensitive to the possible drawbacks of a high-tech collaboration. Never losing sight of the fine cast here, his supervision shows a calm hand at the helm.