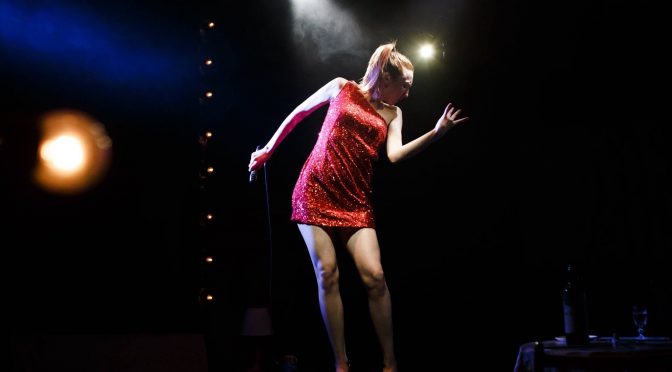 This, the last show before the venue moves across the road to a swanky new home (with nicer loos, one hopes), continues a tradition of strong productions. Jim Cartwright’s hit 1992 play makes for an entertaining, dramatic evening with belly laughs secured by Alastair Knights.

This is a fairy tale, of sorts, with appropriately dark tones. Our Cinderella is a teenager with a taste for diva records she is uncannily good at imitating. Carly Thoms takes the title role, giving a concentrated performance. Credit, please, for speaking softly yet being heard – that’s not easy. When her turn in the spotlight arrives, performing as Shirley Bassey, Judy Garland and more, shine she does. I could happily have heard more from Thoms. Especially her Marilyn Monroe.

Along the way there are some good performances from those ready to exploit Little Voice’s talent: Ken Christiansen as wannabe agent Ray Say and James Peake as a local nightclub manager. Mandy Dassa gets laughs as the next-door neighbour of Little Voice’s dangerously dilapidated home. One minor quibble is the lack of chemistry between Little Voice and Glenn Adamson as her sweet, but underwritten, love interest.

It’s the wicked witch who makes the show – Little Voice’s mother Mari Hoff – a fabulous creation of Cartwright’s, with the soul of a poet and the slingbacks of Bet Lynch. The costumes alone get laughs (designer Libby Todd must have searched hard for that much leopard print). And Charlotte Gorton is superb as the garrulous whirlwind with her rapid-fire Northern wit. Even more impressively, Gorton develops the role from the ‘merry widow’ we first encounter to a figure as tragic as she is vicious. Great stuff.