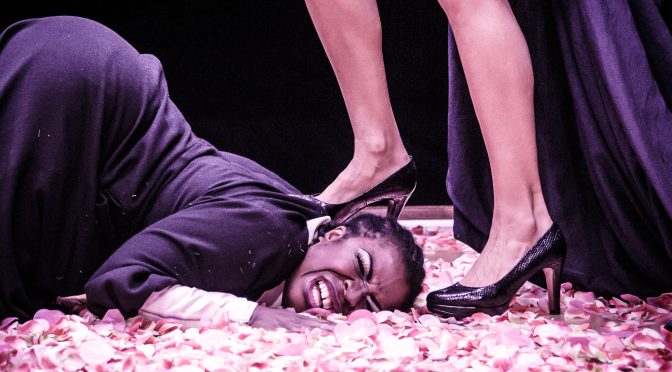 Jamie Lloyd might well be the perfect director for iconoclastic playwright Jean Genet. Both share an irreverent bold approach and a Baroque intensity epitomised in Lloyd’s stirring production of Genet’s 1947 piece. The sick, twisted, sexualised fantasies of two servants, role-playing the murder of their mistress, are made “drunk, wild, beautiful” in this visually arresting and accomplished show.

Lloyd also has a way with stars, enticing exciting talent to the West End and getting the most from many a performer. The luminaries here are Uzo Aduba (from Orange is the New Black), joined by Zawe Ashton, playing the titular revolting servants. Ashton gives a fine performance, Aduba a tremendous one. Intense from the start, Ashton drags up as her mistress for a disturbed ‘ceremony’ that’s an orgy of degradation, violence and kink – her jerky movements unsettle and excite. Aduba is an astonishing presence on stage, frightening and engrossing, her intelligent appreciation of the rhythm of the text carrying you forcibly through the traumatic, suspenseful, action.

When Mistress arrives it’s a blunt shock to find she’s every bit as bad as we’ve been led to believe. Laura Carmichael holds her own (no small achievement given the brevity of her role) portraying a superficial, doll-like rich bitch. This contemporary, recognisable, figure allows Lloyd to emphasise the play’s political content: the accents may be American but a London audience is instantly connected to Kensington.

Fun is had by Lloyd, in keeping with the work of translators Benedict Andrews and Andrew Upton. Genet’s rich themes are explored bravely but there’s also humour from some of the exaggeration here – the maids giggle more than you might expect. The language is blue (very) but I can’t imagine Genet would blush. It’s surprising you don’t see this play revived more often. Lloyd’s production is a valuable addition to the reputation of a modern classic.