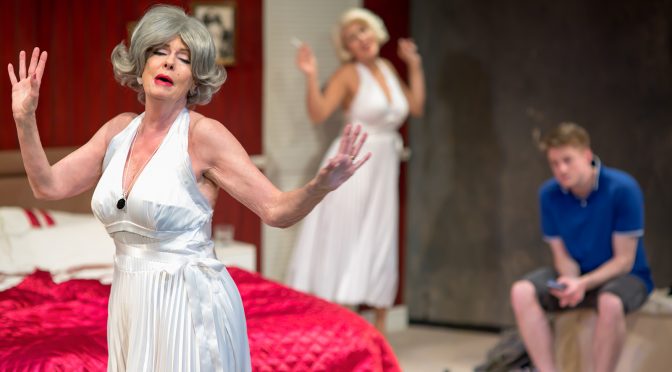 An Essex grandmother runs away from her care home to Los Angeles, where she claims to be Marilyn Monroe. She’s followed by her grandson Joe, portrayed sensitively by Jamie Hutchins, and their relationship is explored with frank humour. The star is Vicki Michelle, famous for her role in ‘Allo ‘Allo, who makes the jokes work and creates some tender moments. Michelle lights up the show and is incredibly engaging. It’s unfortunate that the material falls short of her talents.

Dylan Costello’s script, which director Matthew Gould fails to rein in, suffers from leaden lines and an excess of events. Joe, whose boyfriend is abusive, talks to an imaginary Marilyn and has a burgeoning romance to deal with. It’s not that any of these plots are bad but, when combined, the play takes on more than it can cope with. Themes of fame and self-worth are fine, the topics are rich if unoriginal, but they end up being shouted and what could be a sweet comedy ends up taking itself too seriously.

The play has unhappy roles for its secondary characters. Farrel Hegarty has a near impossible task as two versions of imaginary Marilyns (I am afraid she appears to Michelle’s character as well) and only gets to shine with a smaller role as a TV host – yet another subplot that rams home the play’s suspicion of celebrity. Even worse is the part of Bobby, played by Peter McPherson. Costello creates characterisation through backstory alone – in just one scene we see Bobby as an unstable practical joker, a prostitute, a drug addict and the lover of a Hollywood star threatening to kill him. Clearly, a life a little too crowded with incident.

As for dialogue, the script is a tiresome collection of homespun truths that shouldn’t have been allowed out of the house, let alone near a stage. Some efforts at profundity don’t even make sense, especially in the relationship between Joe and Bobby, who fall in and out of love from sentence to sentence and end up talking about opening a pizza restaurant together. Nonsense like this, including a scene where Joe gets some new trainers, slows things down dreadfully. Throwing in terminal cancer and euthanasia seems vaguely tasteless and Costello’s script continually deflates during a painful second act. Hutchins struggles valiantly and Michelle makes sure you aren’t bored, but it’s a relief to say goodbye rather than au revoir to a script like this.