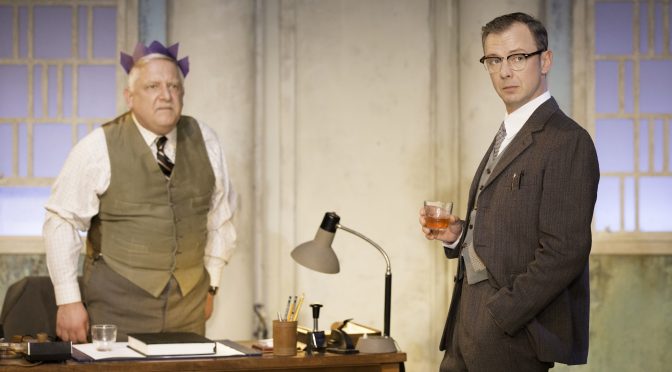 Director Jamie Lloyd’s residence at the Trafalgar Studios continues with a new production of The Hothouse. After the success of his first show, James McAvoy’s Macbeth, it’s a bold choice in the West End to present this early satire by Harold Pinter – a difficult piece that, if successful, makes the audience distinctly uncomfortable.

Set in a sinister state-run ‘sanatorium’, managed by a group of malingering civil servants whose behaviour descends into something close to farce, the play has an air of general paranoia that Pinter refined in later work. Lloyd embraces the comedy so that the evening becomes entertaining, albeit if it lacks a little in bite.

The cast has a ball. As head of the hospital, Simon Russell Beale plays a blustering buffoon, turning red in the face with superhuman facility, his hands revealing a nervous energy that mesmerises. John Simm’s reserved performance as his facetious factotum is skilled, but pales in comparison. John Heffernan’s intelligently camp depiction of a third staff member takes best advantage of the play’s overblown irreverence. The only one to point out the criminal corruption of the institution and flirt with whistleblowing, Heffernan makes his character complex and frightening.

The play isn’t without problems: the only female member of the cast, a thankless role that Indira Varma does her very best with, is written as sex object that dates the piece and does little credit to its author. For all Lloyd’s skill at farce – and the cast’s ability to do justice to Pinter’s demanding, brilliant dialogue – with little weight given to the horror of the abuse of power, The Hothouse fails to get you heated about the issues of freedom and authority that should arise.